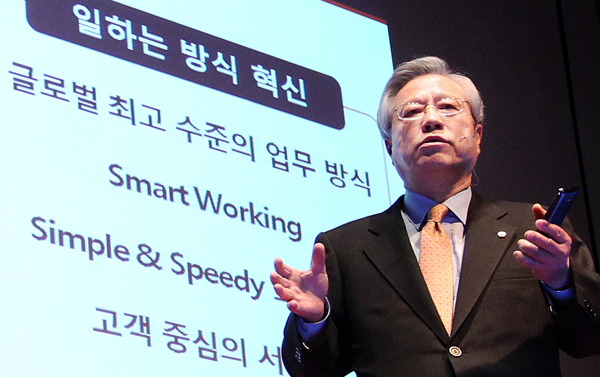 KT Chairman and CEO Lee Suk-chae talks during a press conference yesterday at the company’s headquarters in central Seoul. His term has been extended by another three years. [YONHAP]


KT presented yesterday its goal of doubling its sales revenue to 40 trillion won ($35.6 billion) in three years by transforming itself into a “global media distribution group.”

Marking the launch of the second term of its Chairman and Chief Executive Officer Lee Suk-chae, the nation’s leading mobile and fixed-line operator came up with two key future management strategies: fostering and distributing quality media content globally, and reforming its management system by converging mobile and land-line business divisions.

“We have been confident about our technologies but not really sure about the information and content,” Lee said at a press conference at the company’s headquarters in Gwanghwamun, central Seoul.

“From now on, however, KT will spearhead the move to freely circulate virtual goods around the world.”

Several of the up-and-coming venture affiliates KT has recently acquired - such as Enswers, a content searching firm; Ustream, a live Internet broadcasting service platform provider; and NexR, a cloud computing service operator - are expected to facilitate the creation and distribution of “virtual goods.”

The content will be mostly about the Korean Wave, Lee added.

Lee was reappointed at the shareholders meeting last Friday. This is the first time a KT CEO has had a term extended since the firm was privatized in 2001.

Lee is set to lead the firm through 2015. Right after taking the helm three years ago, he merged KT, which was then only a land-line business, with KTF, a mobile service provider.

In the same year, KT took the lead in the industry to bring Apple’s iPhone to Korea.

Earlier this month KT executives announced emergency management measures amid rapidly shrinking revenue from its land-line business, vowing to give back part of their pay if they fail to meet their goals.

But Lee said at the press conference that the emergency measures are meant to accommodate the earmarked costs of the hefty investments planned for 2012.

He said the scale of investments for its long-term evolution technologies and other software is seen to grow 20 percent this year compared to 2011. KT introduced its LTE service later than its competitors SK and LG.

“Korean customers have to seriously think about whether they are paying the right price [for the handsets].”