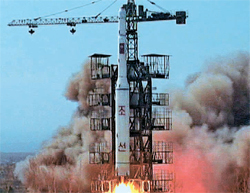 A report issued by the U.S. online defense site GlobalSecurity.org in 2011 said, “The static rocket motor test stand at the Tongchang-dong site is similar to one observed at the Shahid Hemmat facility east of Tehran, Iran. Given North Korean and Iranian collaboration in developing long-range ballistic missiles, the two facilities are probably based on similar design concepts.”

North Korea and Iran have developed bilateral cooperation regarding missile technology. Iran’s intermediate-range ballistic missile Shahab-3 is based on the technology of North Korea’s Rodong-1.

Iran also reportedly sent an observation delegation to the North when the regime conducted its second-round nuclear test after launching the long-range Taepodong-2 missile. 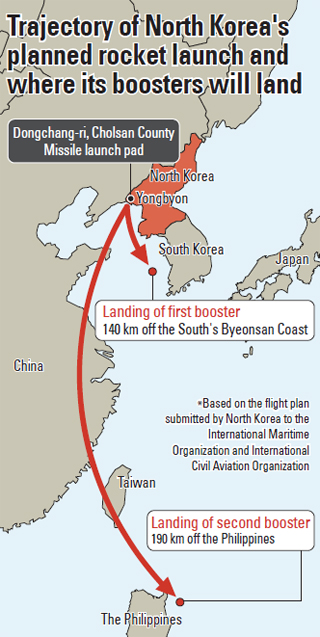 According to the South’s military sources, the new launch site on the west coast, called the Sohae Satellite Launching Station, in Tongchang-ri was completed last year after 11 years of construction, and is reportedly three times bigger than the old one in Musudan-ri, a small coastal village on the east coast.

Joseph S. Bermudez, a U.S. scholar, also said in his report titled “North Korea’s New Launch Facility Almost Complete” that “About one kilometer south of the launch pad there is a rocket engine test stand, which is very similar to the Shahid Hemmat test facility outside of Tehran, Iran .?.?. it [the North] had outsourced this to Iran, which has greater resources and a larger research and development base.”

Experts and sources indicate the location of the site is ideal for the North, as it is only 70 kilometers (43 miles) away from the nuclear facility in Yongbyon and 200 kilometers from a missile plant in Pyongyang, much closer than the eastern site.

Sources said it would only take a day to transport manufactured missiles and warheads from the two plants. Previously, it took four or five days for the North to deliver them to the east by train.

The western site also has the advantage of counteracting an intercept from the U.S. or Japanese Aegis destroyers in the East Sea, because a missile launched from the new site will achieve a higher altitude when it passes the destroyers, making it difficult for them to shoot it down.

According to a picture taken by a U.S. commercial satellite in 2009, compared to the old site where most launch procedures were manual, the newest one is more automated, saving the launch time for each missile.

A conveyor carries a multi-stage ballistic rocket to the launch pad and the rocket will be fueled through an underground pipeline with a separate fuel tank next to the launch pad, which could hide it from a U.S. spy satellite.

A diplomatic source told the JoongAng Ilbo that North Korea hasn’t yet launched a rocket with the pad.