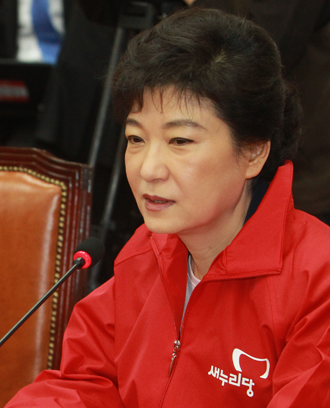 Park Geun-hye, interim leader of the ruling Saenuri Party, views a report of the candidates for the legislative elections. By Kim Hyung-soo

Completing its nominations in 231 constituencies nationwide, the conservative ruling Saenuri Party said yesterday it will announce the list of proportional representation candidates today.

The party announced its ninth batch of 32 candidates and the outcome of eight internal primaries on Sunday. With the announcement, the party completed nominations in 231 out of the 246 electoral districts for the April 11 legislative elections.

As it gave up fielding candidates in 15 constituencies, the party completed its selection of elected lawmaker candidates. Thirteen of the 15 districts are in Gwangju and Jeolla provinces, the strongholds of the opposition Democratic United Party where the conservative party has traditionally stayed away from to avoid battles they are predestined to lose. Two other constituencies were in Seoul, and former Saenuri members were running independently in the districts.

The anti-incumbent trend was clear as the party decided to drop 41.6 percent of its current lawmakers. In Seoul and Busan, more than 50 percent of the incumbent lawmakers failed to win chances to seek reelection on the ruling party’s tickets.

In Seoul’s Gangnam A and B Districts, where the party recently withdrew its nominations over controversies, two senior former diplomats were fielded. Shim Yoon-joe, former assistant foreign minister, was nominated for Gangnam A District, while former Trade Minister Kim Jong-hoon was fielded in Gangnam B District.

The party also decided to withdraw two more nominations on Sunday and replaced them with new faces. Son Dong-jin, the Saenuri candidate for Gyeongju, was accused of providing a total of 10 million won ($8,911) to the journalists of the region, and the nomination was canceled. The party nominated Representative Jung Soo-sung instead.

The nomination of former KT Vice Chairman, Suk Ho-ick, for Goryeong-Seongju-Chilgok of North Gyeongsang was also scrapped over his alleged gender discrimination, and Yi Wan-young, the party’s senior labor policy advisor, was named instead.

In total, the party canceled nominations of four candidates and fielded replacements.

A closer look at the Saenuri Party’s 231 candidates showed that 60 out of its 144 incumbent lawmakers were culled. While 13 of the 60 declared earlier that they won’t seek reelection, 47 applied for nominations but failed.

Of those 47, 15 were Park Geun-hye loyalists, while the majority of the rest were pro-Lee Myung-bak lawmakers. Speculations were once high that more Park loyalists would be dropped, but many of them managed to survive in Gyeongsang areas.

In Daegu, Representatives Lee Hahn-koo and Suh Sang-kee, both Park loyalists, were allowed to seek reelection, while two out of three lawmakers who were close to the president were dropped.

In Busan’s Suyeong District, Representative Yoo Jae-jung, a Park loyalist, won the nomination despite a sex scandal revelation, while former Blue House senior political secretary Park Heong-joon failed to win the ticket. Park said the primary was canceled abruptly and Yoo was nominated without scrutiny of his character and ethics qualifications. Calling it a conspiracy, Park hinted at running in the district independently.

In Seoul and Gyeonggi, four out of eight proportional representatives from the Pro-Park Alliance, a splinter party of Park loyalists which later merged back with the ruling party, won nominations.

Of the 38 former ministers and vice ministers of the Lee administration and Blue House aides, only 17 passed the cut.

The party also favored candidates with engineering backgrounds, while nominating fewer law professionals. In the 2008 legislative elections, the party nominated 56 law professionals including former judges and prosecutors, but this time, only 27 won nominations.

Jhun Ha-jin, former CEO of the software developer Haansoft, was one of the leading businessmen of technology firms who won the Saenuri nomination. He will represent the conservative ruling party in Bundang B District.

The Saenuri Party yesterday named its interim head Park the chief of its election campaign. “Whether she will head the campaign alone or jointly will still need to be discussed,” Representative Hwang Young-cheul, the party’s spokesman, said yesterday. If the campaign will be co-chaired, an outside expert will likely be recruited.

The Saenuri Party will also announce its list of candidates for the proportional representations today. The nomination review committee received 616 applications and about 50 candidates were selected. Interviews started last week.

Speculations are high that Park, the presidential frontrunner of the ruling party, will receive top priority on the list, as many party members said it is desirable for her to remain inside the National Assembly to keep a steady influence over lawmakers. Park, who won four consecutive terms in Daegu, said last month that she won’t seek reelection in her constituency because she wanted to devote herself to larger politics.