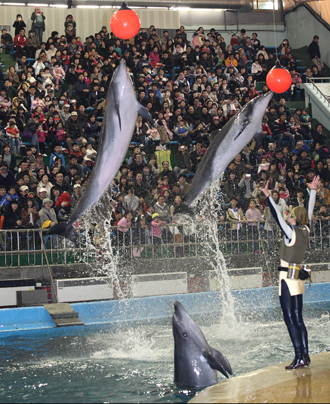 Trained dolphins, including 13-year-old “Jedol,” an Indo-Pacific bottlenose that was illegally captured three years ago, perform tricks on Sunday at a show that may be their last in Seoul Grand Park in Gwacheon, Gyeonggi. Following the Seoul Metropolitan Government’s decision last week to release Jedol back into the Jeju sea in 2014, Seoul Grand Park said it will temporarily suspend its dolphin show for one month from yesterday. [YONHAP]