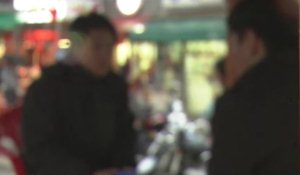 Jang Jin-su, an ethics official of the Prime Minister’s Office, said on a podcast from liberal online media source OhmyNews yesterday that the office of the Senior Secretary to the President for Civil Affairs offered him cash and asked him to keep mum on the allegation that the Blue House was engaged in illegal surveillance against a civilian in 2008.

According to the show, an unidentified official of the Public Ethics Office met with Jang at a restaurant near the Government Complex in central Seoul in April 2011 and handed him 50 million won ($44,551), saying the money was “sent from Jang Seok-myeong,” an official at the office of the Senior Secretary to the President for Civil Affairs.

The whistle-blower also said that he would be offered 500 million-1 billion won additionally, from the secretary’s office.

According to the podcast, the meeting came only a few days after Jang was sentenced to two years in prison on charges of destroying evidence related to the government’s illegal surveillance.

“At the time, I confessed at an internal questioning by the Prime Minister’s Office that it was the Blue House that ordered me to destroy the evidence,” Jang said on the show. “And I guess that confession made the presidential secretary’s office nervous.”

Jang also confessed on the show that he spent most of the 50 million won he received at the restaurant to purchase his house and pay back his debt and that he would take responsibility for it.

However, the secretary’s office said Jang’s allegation is ludicrous.

“He is an utter stranger to me, I haven’t had a single chance to see or meet him,” Jang Seok-myeong, the official of the presidential secretary’s office said. “I’m an ordinary government official. I don’t have that much money [to give him]. Jang and I don’t have a relationship.”

In 2008, a local businessman who posted a video clip lampooning President Lee Myung-bak was allegedly raided and investigated by the Public Ethics Office, which was supposed to monitor government officials’ corruption.

The case surfaced after Jang’s allegations that the office of the Senior Secretary to the President for Employment and Social Welfare ordered him to destroy evidence to prove the link between the surveillance and the Blue House. He will face questioning from the prosecution today.