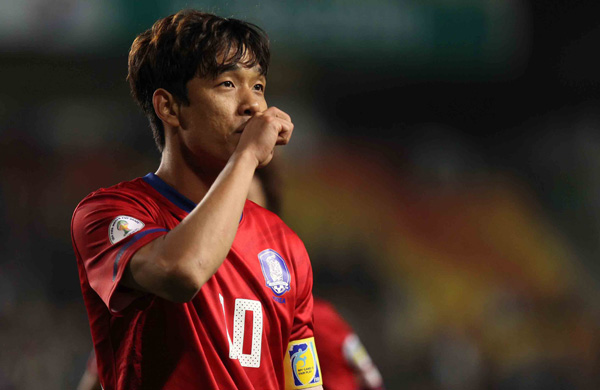 
Arsenal striker Park Chu-young is again at the center of controversy. Not because he isn’t finding time on the pitch with the northern London club, but because he was able to delay his military service until 2022 - a move some ridicule as an escape from his mandatory national duty.

Last week, Park’s legal representative DLS revealed that the Korean striker can postpone his military service until he is 37 after he received a 10-year residency status from Monaco, the sovereign city-state on the French Riviera. Park played three years for AS Monaco before moving to Arsenal last summer.

According to Korean Military Service Law Clause 146 and the regulations regarding overseas trips for military service candidates, those who earned a residency visa for over five years from a country that has no permanent residency law and lived in that country for over one year can postpone their military service until the age of 37.

Monaco doesn’t have permanent residency in their legal system, and since Korea officially established diplomatic ties with the European city-state in 2007, a year before Park joined AS Monaco from FC Seoul, the rule applies perfectly.

Park isn’t breaking the law at all. His move was in fact approved by the Military Manpower Administration (MMA), the governing body of military services, last August.

The question is: Why did he reveal this news after seven months? Park’s legal representatives said they just couldn’t find the right time to announce the news in between contract negotiations with European clubs last summer.

Many speculate that this was probably the biggest factor that led Park to sign with Arsenal rather than going to LOSC Lille at the end of the summer transfer market.

The MMA said that if Park stays in Korea for more than six months and engages in local commercial activities, which refers to earning money as an employee in at least 60 days of employment, the government can cancel his permit of extending overseas travel.

For regular national team members like Park, they do receive money after playing in international matches. However, since the national team doesn’t play matches for 60 consecutive days, the MMA said that it considers national team activities non-commercial.

As a result, Park, the former Korean national team captain, is cleared to play football in Europe without fulfilling his military service, and there is also no barrier to playing for the national team.

He has cleared the road to build a successful career until he turns 37.

There has been a lot of buzz around this process, but Park has done nothing wrong in a legal perspective. However, although it’s legal, some fans still think that Park benefited from loopholes in the current system and has set a bad example.

Previously, for Korean footballers to simultaneously compete and fulfill their military service, they either needed to apply for the Korea Armed Forces Athletic Corps (Sangmu) before their 27th birthdays or join the National Police Agency before their 29th birthdays.

To benefit from this rule, players needed to play for domestic clubs for at least one year before submitting applications. For this reason, Park was expected to return to Korea this year or next year to continue his football career.

Probably the best way for Park to waive his military duty is to win a medal in the upcoming Olympics. Park was considered the favorite choice for the U-23 team’s wild-card selection, and many thought the striker was eager to participate in the Summer Games to have a shot at exemption from military duty.

However, although there is still a chance that Park can be included in the final Olympic team, Park has pioneered a new method to solve his military problem. There has been no similar case reported in the past among sports stars.

What makes Park “special” is that now he can actually select how and when to serve his military duty, including his choice of exemption.

According to the Korean conscription law, if Park decided to finish his military service before age 36, he will serve in active duty.

If the Gunners striker returns to Korea at age 36 or 37, he will serve in the public duty personnel service. However, if Park decides to return to Korea after age 37, he will be categorized in the Second Citizen Service, which will only be called up during a war. This means he can avoid the military duty if he wants.

Park said through his legal representatives last week that he will come back to Korea and serve in the military in the future. But the fact that he hasn’t announced when he will come back worries me. At this moment, we just have to believe what Park has said and trust him.

Park should not forget that he is a Korean citizen who has a duty to serve his country. His superb performance overseas will promote Korea’s national image and boost prestige, but that doesn’t mean he is special. Park’s goal can surely bring joy to all Koreans, but that doesn’t mean his goal is more valuable than the blood of soldiers who died defending this country.