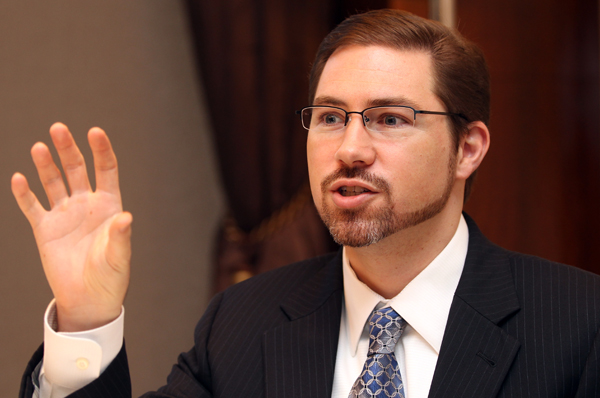 
Citibank Korea is targeting “emerging affluent” clients - young individuals with investable assets who represent the fastest-growing market segment in financial services - in hopes of expanding its presence in the local market.

“Our three major strategies this year are expanding global business and strengthening management of our clients’ assets while marketing to a new emerging affluent sector,” said Citibank Korea President Ha Yung-ku at a press briefing in central Seoul yesterday.

Citibank Korea estimates there are roughly 11 million people, or 35 percent of the adult population in the country, with investable assets between 20 million won ($17,780) and 100 million won who make up the emerging affluent segment.

Emerging affluent people can be characterized as well-educated and technologically savvy. They are openly mobile and are very focused on their personal and financial futures.

“The segment actually generates $12 billion of consumer financial service revenue each year, or around 25 to 30 percent of the entire Korean [financial service] market,” Baranowski said. “And it is growing rapidly at 8 to 10 percent per year.”

He said the growth is driven by various factors including technological improvements, higher levels of education, globalization and the underlying rapid economic growth Korea has experienced.

“All of the local banks have some sort of VIP service under various titles like ‘priority,’ ‘preferred,’ ‘reserved’ or mineral names such as diamond and gem,” Baranoswki said.

“What local banks have been slow to do is to seek the emerging affluent segment. They want banks to value their time while increasingly looking for high-quality financial advice for their future.”

Citibank said that the tech-savvy emerging segment of affluent clients often prefers a do-it-yourself approach to banking, and thus online versions are a critical component to appealing to this group’s preferences.

“What we need to do is provide personal banker for support but offer online and research tools so they can do it themselves,” Baraonswki said.

Although Korean consumers use an average of three to four banks, Citibank’s own survey of 1,500 Koreans with an annual income of 25 million won to 75 million won revealed that 70 percent of clients were not satisfied with the financial services they were offered.

Additionally, 51 percent said they lack the financial knowledge to properly invest their money. This figure was higher than the Citibank survey’s Asia average of 46 percent.

Sixty-seven percent of the Korean respondents said they are worried about their financial future, more than Asia’s average of 47 percent.

This is the highest in any Asian country,” Baranoswki said.