Manning to play for Denver Broncos

Manning to play for Denver Broncos 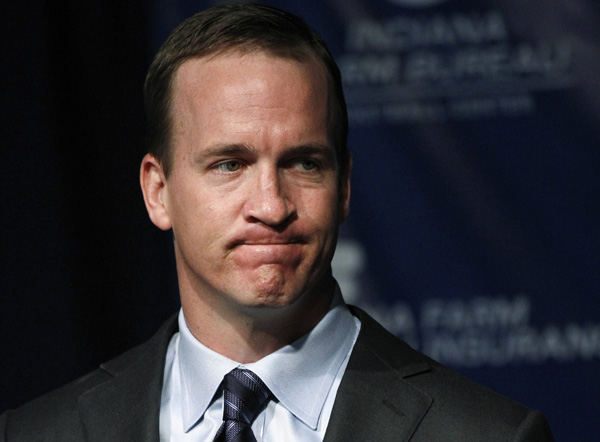 Indianapolis Colts quarterback Peyton Manning reacts during a news conference in which Colts owner and CEO Jim Irsay announced Manning’s release from the team after 14 seasons in Indianapolis in this March 7, 2012, file photo. [REUTERS/YONHAP]


DENVER - Peyton Manning wants to play for the Denver Broncos in Act II of his outstanding career.

A person with knowledge of the discussions said the NFL’s only four-time MVP and the year’s most sought-after free agent called Broncos executive John Elway on Monday morning and told him he had decided to come to Denver.

Another person who was briefed on negotiations said Manning also called Tennessee Titans owner Bud Adams and told him that he had picked the Broncos. Both people spoke on the condition of anonymity because they were not authorized to talk publicly about teams’ efforts to lure Manning.

Adams released a statement Monday confirming the Titans were out of the running and later told The Tennessean, “He called me himself and told me he wasn’t coming, that he made his mind up to go with Denver.’’

Besides the Titans, the San Francisco 49ers also had been a finalist in the chase for Manning.

ESPN first reported the record-setting quarterback instructed his agent to negotiate the details of a deal with the Broncos, less than two weeks after he became a free agent when the Indianapolis Colts released him.

“I think it’s a great place for him,’’ Broncos defensive end Robert Ayers said outside the Broncos’ complex.

Manning sat out all of 2011 because of multiple neck surgeries, but his success in the past has made him this offseason’s top potential signing.

He was wooed to Denver by Hall of Fame quarterback Elway, who led the Broncos to two Super Bowl championships and now serves as their vice president of football operations.

Elway never sounded all that convinced that Tim Tebow was the right answer at the sport’s most important position, and now could trade him even though the popular QB energized the Broncos in leading them to the playoffs last season despite some erratic play.

“I wouldn’t say I feel bad for him,’’ Ayers said. “It’s a business. And I’m pretty sure Tim understands that .?.?. We wish him luck, no matter what he does. I hope he’s here. He’s a great leader, a great locker room guy.’’

Manning was cut loose on March 7 by the Colts so they could avoid paying him a $28 million contract bonus. The move marked the end of an era - a 14-year alliance between the team that drafted Manning No. 1 overall and the QB who brought Indianapolis from football irrelevance to the 2007 Super Bowl title and a second appearance in the NFL championship game three years later.

But with Manning’s rehab continuing, the Colts decided it was time to rebuild from top to bottom, and they are expected to take Stanford quarterback Andrew Luck with the top pick in April’s draft.

Two days after standing alongside Colts owner Jim Irsay at an emotional farewell news conference, Manning began his free agency tour in the place it appeared to be ending: Denver.