Only one man gets new iPad in Korea - with 3G

Only one man gets new iPad in Korea - with 3G 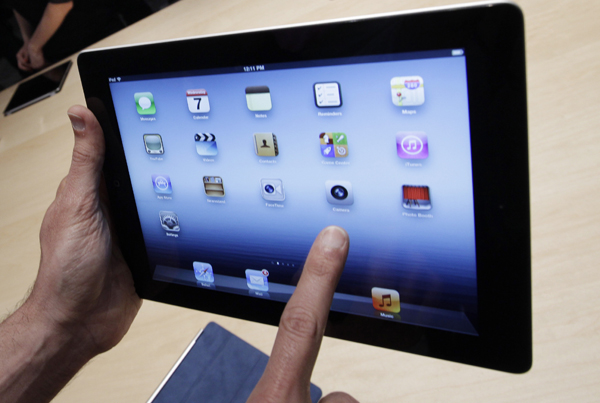 In this March 7 file photo, a new Apple iPad is on display during an Apple event in San Francisco. But Korea still doesn’t know when Apple will put the coveted device up for local sales. [AP/YONHAP]


The first user in Korea of the new iPad hit the networks Monday.

But he will be alone for the foreseeable future. Korea still doesn’t know when Apple will put the coveted device up for local sales. And it’s almost certain it won’t work on Korea’s speedy 4G networks, although it will on 3G.

The first user, surnamed Kim, brought his iPad in from the United States and signed up for a Wi-Fi and third-generation telecommunication account at a KT branch in Anyang, Gyeonggi, said a KT spokeswoman. That option is eligible for anyone with the iPad 1 or iPad 2.

An individual may subscribe with a mobile product that is unsold here but bought from foreign countries through two service providers - KT and SK Telecom - if he has gone through a so-called “frequency certification process.” He or she is required to submit a report detailing the type of mobile gadget and personal contacts to the Korea Communications Commission’s Radio Research Agency. The measure is free of charge but is limited to only one gadget per person.

The new iPad went on sale in 10 countries Friday, and Apple said Monday it sold three million units over the weekend. Philip Schiller, Apple’s senior vice president of worldwide marketing, described it a “blockbuster,” saying it marked “the strongest iPad launch yet.”

People snapped the device up in the U.S., Britain, France, Switzerland, Japan, Singapore and Hong Kong. Sales in more than two dozen further countries will begin on Friday.

But not in Korea, and no launch date has been announced, even though Koreans bought 1.2 million tablet computers in 2011.

An Apple Korea communications manager refused to give reasons for the delay.

An industry insider said the delay is due to the unique system in Korea that requires all mobile equipment to undergo safety certification tests. In most other countries, when a gadget has passed the test in its home country, no additional procedure is required before imports begin, said the source, who refused to be identified. China has a similar requirement.

The government-led test takes up to a month. It’s unknown whether testing on the new iPad has begun. That probably means the iPad won’t officially arrive in Korea until late April or early May.

The other technical glitch is that the frequency bands used by the new iPad to access 4G or long-term evolution cellular networks, 700 megahertz and 2.1 gigahertz, are not available in Korea. One of the biggest features of the new iPad is its compatibility with the super-fast network, at least in the U.S. and Canada.

In Japan and Hong Kong, an Apple Korea spokesman said, the iPad will have to be used either on a Wi-Fi connection or the slower 3G networks.