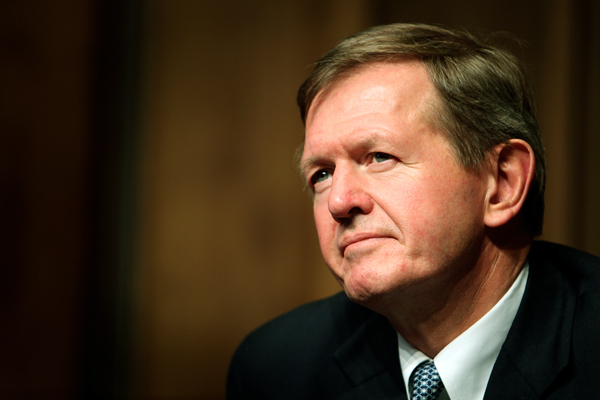 “The most important thing that one has to realize is that most companies today work under tremendous global pressure,” Wallenberg said.

“It’s not just as simple as placing social responsibility over corporate performance.”

He said companies not only have to stay competitive but must simultaneously work to contribute to society.

“You will have to address the shareholders that invested in the company and support the employees, customers and society,” Wallenberg said.

But in order to make strong contributions to society, he acknowledged companies must first make profits.

“You have to have earnings, an income generator, and hopefully it will benefit society through employment, tax revenues and so on,” he said.

In recent years, the social responsibility of major Korean conglomerates has been ridiculed, especially as politicians emphasize social welfare policies and wealth redistribution leading up to the April 11 legislative elections.

Wallenberg said he has been touring different countries to follow up with Nordic multinational companies and major clients.

The Wallenberg chairman played down his meeting with the Samsung heir apparent.

“We are not living in the same circumstances and we don’t live in the same part of the world, but we have had our own experiences and are happy to discuss our part of the realm,” Wallenberg said of his meeting with Samsung.

He said he has known Jay Y. Lee for a number of years and that there was nothing special to the meeting except that during his visit, many Nordic clients came along to meet with Korean companies.

“They [the Nordic clients] gained a better understanding of the companies through the experience,” said Wallenberg.

SEB President Falkengren said she discussed with Lee how the Northern European companies have been affected by the recent crisis in Europe and how Nordic companies are performing in Korea.

Falkengren, however, said although SEB has operations in Singapore, Shanghai, Beijing and Hong Kong, it has no immediate plans of opening up operations in Korea.

Wallenberg Group is the largest family-owned banking and industry group in Sweden with total assets equivalent to 30 percent of the country’s GDP.