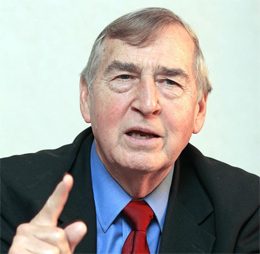 
Graham Allison, a leading analyst of U.S. national security and a nuclear proliferation expert at Harvard University, said the upcoming Nuclear Security Summit will have a “powerful latent message” when the heads of over 50 states gather in Seoul next week.

Allison, director of the Harvard Kennedy School of Government’s Belfer Center for Science and International Affairs, had been critical of the George W. Bush administration’s North Korean policies. “When Bush left office in 2009, the score in this big game was George W. Bush: 0, Kim Jong-il: 8.”

In an interview with the JoongAng Ilbo on March 13 and an earlier exchange with the Korea JoongAng Daily, Allison discussed what he called the failure of South Korea, the United States and China in their North Korean policies over the past decade and the need for these countries to work together to avoid missteps in the future.

The upcoming Seoul Nuclear Security Summit is scheduled for March 26-27 at COEX, southern Seoul, and was first initiated by President Barack Obama in 2010 in Washington.

Q. A New York Times article on Feb. 21 quoted you as saying that the conflict over Iran’s nuclear program is evolving into a “slow-motion Cuban missile crisis.” What is your take on the evolution of the long-pending North Korean missile and nuclear programs?

A. The Cuban missile crisis was the most dangerous diplomatic incident in the history of mankind. But compared to Nikita Khrushchev, Kim Jong-il was a figure who was several times more dangerous.

The Cuban crisis lasted for 11 days from Oct. 22 to Nov. 2, 1962 before coming to an end, but the North Korean crisis has continued for over 10 years. Furthermore, his son, an untested young leader, came to power suddenly.

There is a high chance that they will provoke the United States like they did to the South with the Cheonan sinking. We cannot let down our guard.

Recently, the U.S. and North Korea came to an agreement on the temporary suspension of North Korea’s uranium enrichment program in exchange for 240,000 metric tons of nutritional aid. But the U.S. has constantly expressed that it “won’t buy the same horse twice.”

Personally, I am not opposed to buying the same horse twice. Rather, I support it. North Korea is a failed state with extortionist and extremist tendencies. When dealing with that kind of opponent, it’s right to buy the same horse twice in order to avoid crises.

What do you think should be the “essence of decision” for leaders of Northeast Asian countries and the U.S. in this time of diplomatic turbulence?

This is an important year when leaders of leading nations may change. North Korea somehow ended up cutting the tape first. For the past 10 years, no country including South Korea, the United States and China, succeeded in their North Korean policies. In the beginning of his term, President George W. Bush pushed for a change in the North Korean regime and the dismantling of its nuclear program, but nothing was achieved.

China likewise maintained an extremely shortsighted policy. North Korea has always chosen an option where neighboring countries questioned, “They won’t go that far, will they?” They will continue to do so. Korea, the United States and China need to come together and discuss.


How do you think the death of Kim Jong-il will affect the future of the North Korean power system?

Kim Jong-il was an outstanding negotiator. Every year, the [Harvard] Kennedy School presents “The Great Negotiator Award,” and Kim Jong-il’s name as a candidate came up amongst my colleagues only half in jest. Despite being a failed regime, it’s a North Korea that has hung on all these years and gained everything it wants by using nuclear weapons as leverage.

It is clear who the victor is between Kim Jong-il and the Bush administration. Of course, the North Korean regime will also crumble. However, rather than crumbling suddenly, gradually drying out should be the basis of neighboring countries’ North Korea policies.

Why does the world need the Nuclear Security Summit?

President Obama correctly identified nuclear terrorism as the “most immediate and extreme threat to global security.” If governments do not change their policies and practices, a successful nuclear terrorist attack that would change the world as we know it is inevitable. But there exists a feasible, affordable checklist of actions that, if taken, would shrink the risk of nuclear terrorism to nearly zero.

The first Nuclear Security Summit in 2010 took significant steps towards improving global nuclear security, but much remains to be done. The Seoul Summit will therefore be essential in the ongoing effort to bend current trends and prevent nuclear terrorism.

What results do you think should come out of the summit?

Countries should agree on a “gold standard” for nuclear security. This would include steps to reduce the probability of theft of nuclear weapons or materials to a level as low as reasonably achievable, and a mechanism to makes states accountable for their nuclear security measures.