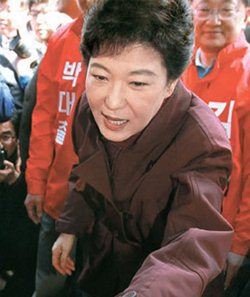 Jung Hong-won, head of the party’s nomination review committee, held a press conference yesterday morning and announced the list. Min Byung-joo, director of the nuclear training center at the Korea Atomic Energy Research Institute, was listed at the top, while Kim Jung-rok, chairman of the Korea Association of Persons with Physical Disabilities, was listed in second place.

Park Geun-hye, the interim head of the party, was given No. 11 on the list, on which 50 percent of the candidates were women.

“The most important factor was how best we can touch the people’s hearts,” Jung said. “Professions and achievements were also taken into account.” 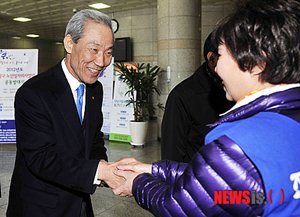 The theme of favoring female candidates with science and engineering backgrounds was evident. Park, the Saenuri’s interim head, also majored in electrical engineering.

Yun Yeong-hee, chairwoman of the Korea Agriculture, Fisheries and Food CEO Association, was ranked third for her achievements as a successful female businessman. She was praised for overcoming the difficulties in the rice market opening with innovative products using rice processing.

Cho Myung-Chul, a defector who once worked on the faculty of the Kim Il Sung University in North Korea, was given fourth place. Cho is currently heading the Institute for Unification Education.

Fifth place was given to Kang Eun-hee, CEO of technology company Winitech. Lee Sang-il, an editorial writer of the JoongAng Ilbo, was given eighth place.

Jasmine Lee, a part-time actress and civil servant, was given the 17th place on the list. The 35-year-old ethnic Filipina who is a Korean citizen and was married to a Korean man came into the limelight after playing the role of the titular character’s mother in the hit movie “Wandeuki” last year.

Lee is currently working as the public relations team leader in the Foreign Residents Assistance Division of the Seoul Metropolitan Government after she became a naturalized Korean citizen in 1998.

Assigned a number high enough to guarantee her a seat, Lee will likely become the first naturalized Korean to become a lawmaker. “In 20 years, one out of 10 Korean households will be a multicultural family, and I want to play a clear role,” she said.

While major political parties often assigned the first spot on the proportional representation lists to their presidential front-runners in the past, the new era of favoring a female front-runner began in 2004 after the election law was revised to force the political parties to populate at least 50 percent of their lists with female candidates.

In 1992, Kim Young-sam was the first candidate on the Democratic Liberal Party’s list, while the New Korea Party gave its first spot to Lee Hoi-chang in 1996. In 2000, Lee was still listed first on the Grand National Party’s list.

Starting in 2004, Kim Ae-sil, the first Korean economist with a doctoral degree, was named the GNP’s first proportional representation candidate, and Kang Myung-soon, a pastor known for her community service programs, was given the No. 1 spot in the 2008 elections.