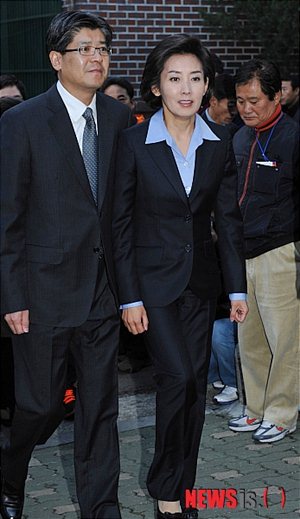 Incumbent judge Kim Jae-ho, who has been accused of using his power to have a netizen indicted for defaming his wife in 2005, has again failed to respond to a police summons, causing them to consider bringing him to the agency by force.

“He wasn’t able to appear before the police due to schedule problems.”

An official at the eastern court confirmed that Kim presented the office with his normal schedule and participated in trials scheduled yesterday.

Kim, 50, is a judge at the Seoul Eastern District Court and he is currently being suspected of power abuse.

He allegedly asked prosecutor Park Eun-jeong, 40, of the Bucheon branch of the Incheon District Prosecutors’ Office, to indict a 50-year-old netizen surnamed Kim for slandering his wife Na Kyung-won, a former Saenuri Party lawmaker, in 2006. Prosecutor Park was summoned for the first time by the police on the same day as Kim, but also failed to show up.

The police yesterday notified both Kim and Park to appear at the agency on Monday, March 26.

“We are considering apprehending Kim forcibly if he does not respond to the summons,” a spokesman at the police agency told the JoongAng Ilbo.

“Both Kim and Park have been avoiding calls from the police.”

The police however predicted that the possibility of apprehending Kim forcibly is low.

“Even if we file a warrant to apprehend Kim, a court might not issue it,” the spokesman added.

Allegedly, Kim has told the police that he can’t appear at the agency because he doesn’t want to face reporters that are waiting for him after not responding to the police’s first summons.