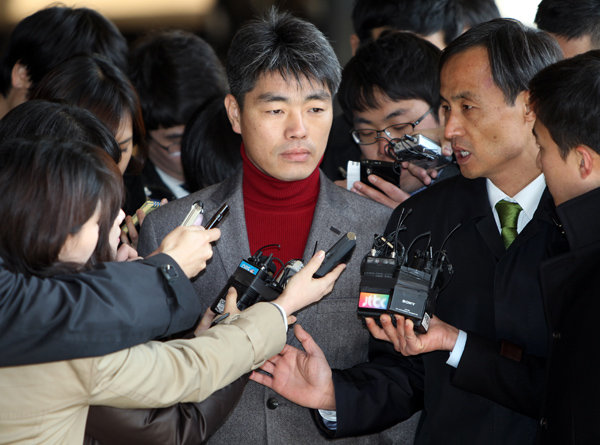 Reporters swarm around Jang Jin-su, center, yesterday as he walks into the Seoul Centeral District Prosecutors’ Office in Seocho-dong, southern Seoul to face questioning by the prosecutors. [YONHAP]


Jang Jin-su, the former official for the Prime Minister’s Office who made the bombshell allegation that high-ranking Blue House officials were involved in the 2008 illegal surveillance scandal, attended questioning of prosecutors yesterday.

Saying “the truth must be revealed,” Jang told reporters swarming him that “he will tell everything as it is.”

Asked if Jang has anything more to reveal, his lawyer responded, “We won’t say we don’t have any more. We will keep watching the prosecution’s investigation and determine whether to reveal additional allegations.”

Jang’s lawyer also told reporters that Jang brought part of his recording tapes for questioning that contain his testimony regarding the allegation.

He said Jang will decide whether to submit the rest of his tapes to the prosecution if he judges prosecutors will launch a full-scale probe.

When asked if the recording tapes contain anything that could prove whether high-ranking Blue House officials are involved in the scandal, the lawyer said, “we don’t deny it. But we can’t say it at this moment.”

According to the Seoul Central District Prosecutors’ Office, prosecutors will question Jang whether it’s indeed true that the Blue House allegedly ordered him to destroy evidence related to the Lee Myung-bak administration’s alleged illegal surveillance activity against a civilian in 2008.

Jang previously told local media that the Office of the Senior Secretary to the President for Employment and Social Welfare ordered him on July 7, 2010 to destroy computer hard disks of the officials who were involved in the Lee administration’s alleged illegal surveillance against a local businessman who posted a video clip lampooning the president in 2008.

Since then, Jang has released a string of new accusations almost every day, constantly drawing public attention to the issue: When he worked for the public ethics office of the Prime Minister’s Office, he gave a certain amount of money to three Blue House officials every month; an official of the senior presidential secretary’s office for employment and social affairs appealed him not to reveal any more truth, saying “do you want to kill every one?”; an official of the senior presidential secretary’s office for civil affairs gave him 50 million won ($44,404) in return for his silence about the evidence destruction, offering him a job as a civil servant in a distant city.

Speculation is rising that the probe into the scandal could expand to President Lee’s close confidants, who are dubbed as the “Yeongpo Line.” The Yeongpo network refers to those who came from the same hometown with the president, Pohang, and its neighboring town Yeongil. Three government officials who allegedly are involved in the scandal belong to the network.

Lee Young-ho, 48, former official in the presidential office of the Senior Secretary to the President for Employment and Social Welfare, had a press conference yesterday in the Korea Press Center for the first time among three officials Jang accused.

“It is true that [we] ordered him[Jang] to destroy data in the computers for fear of leaking confidential information, but the Blue House officials have never involved in the illegal civilian surveillance,” Lee argued.

About 20 million won Jang said he received from the officials, Lee said, “[We] gave the money to Jang bona-fide as Jang suffered from financial difficulties.”