MLB All-Star adjusts to life on the KBO mound

MLB All-Star adjusts to life on the KBO mound 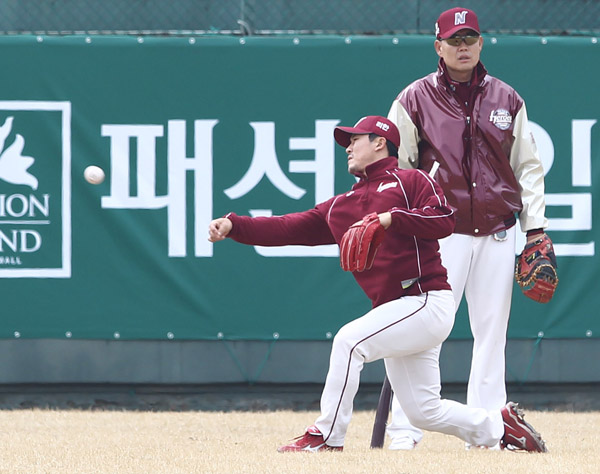 The 33-year-old pitcher didn’t step up to the mound yet, but for Kim, just watching Korean fans from dugout is awaited experience that he has been waiting for.

Kim has been one of the top Korean pitchers in the Major League Baseball along with Park Chan-ho, who is now with the Daejeon Hanwha Eagles. However, he has never played professional baseball in Korea.

After helping Korea to win the gold medal at the 1998 Asian Games and got exemption from his military service, he signed with the Arizona Diamondbacks next year and made the big-league debut.

The submariner enjoyed early success, winning the World Series in 2001 and becoming the first Asian to play in a final series. In 2002, he had a career-high 36 saves with a 2.04 ERA for the Diamondbacks and was selected as an All-Star that year.

He then moved to the Boston Red Sox in the middle of the 2003 season and also earned another World Series ring in 2004, becoming the sole Asian player to contribute to an MLB title in both the American and National leagues.

However after that Kim started to derail, moving teams frequently and eventually losing his spot in the MLB. For over nine seasons in MLB, he amassed 54 wins, 60 losses and 86 saves along with a 4.42 ERA in 394 games.

Last year, Kim tried to revive his career in Japan’s Nippon Professional Baseball with the Tohoku Rakuten Golden Eagles, but he failed to make it to the first-team roster due to a persistent ankle injury.

But in this January, Kim signed for the Heroes with an one-year deal worth of 1.6 billion won and returned to local baseball league.

Kim Si-jin, the manager of Heroes, said that the former Major Leaguer isn’t yet ready to play like other pitchers, but will bring the pitcher up to the mound after middle of April.

In an interview with Ilgan Sports, JoongAng Ilbo’s sports daily, pitcher Kim also admits that his form isn’t best to play for competitive game, but will gear up his condition to show better performance in the future.

How do you feel seeing Korean fans in the stadium after spending all of those years in overseas?

I know I can’t go up to the mound, but just sitting in the dugout and watching fans makes me happy.

How’s your condition these days?

My body is healthy and my condition is good. But I’m not in the level of playing in the competitive game right away. After I face more hitters and getting bashed from them more and more, then I can know my ball stuff is ready or not. I’m currently working my best, but I think I can pitch well in summer. These days, it’s still bit cold and since I started live pitches recently, I can’t exactly tell how much my ball power is ready.

Compare to last March in Japan or your stint in Major League Baseball, what’s different in Korea this time around?

In the U.S., I wasn’t ready for more several years to pitch. This time around in Japan my form wasn’t’ also ready to go up to the mound. I got ready in the middle of season, but due to several team situations, I couldn’t feature in the game in Japan. However, now my form is good and I just have to gear up my rhythm. Since I haven’t pitched for many years, I know it’s going to be hard in first place. But you know, pitchers really need to pitch at the baseball stadium.

How do you compare your ball stuff compare to times in U.S or Japan?

If you want to compare me in the past and present, I really have nothing to say. I try not to think of glory days. What’s important is that now I can pitch without having an injury. I just have to give my effort and show what I can do at this moment when facing opponents.

How would you evaluate Korean hitters after watching them in practice games?

They’re good. I mean Korean batters were good originally. I think veteran sluggers who have many records in batting categories hit well even in present days. But there are too many hitters to look out and I can’t especially pick one.

How about your Heroes batters? Is there any teamamte that you don’t want to pitch against?

I have to say from first batter to ninth batter. I’m just glad that they’re my teammates. [Laughs].