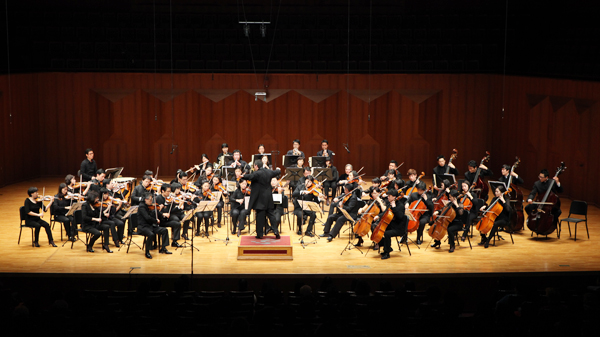 
THE GREAT 3B SERIES: BACH

Today: The Seoul Arts Center ends its three-year series on three major classical composers with the music of Bach. Previous years featured Beethoven (in 2010) and Brahms (in 2011).

The Korean Chamber Orchestra, founded in 1965 and the country’s first chamber group, will perform Nos. 1, 4 and 6 of the Brandenburg Concertos and Nos. 2 and 3 of the Orchestral Suites. Kim Min conducts a group of esteemed guest artists including French flutist Philippe Bernold, German trumpeter Ales Klancar, violinists Lee Kyung-sun and Kim Nam-yoon and pianist Park Jong-wha.

Kim, the 2006 Unesco Person of the Year, will play all of Beethoven’s 32 piano sonatas over the next two years, a feat that has been previously been performed by Alfred Brendel and Wilhelm Kempff. This year, Kim will perform sonatas No. 1 through No. 16. Other concerts will take place on June 21, Sept. 6, Nov. 8.

April 7: There will be a lot of shuffling in Olympic Hall when the duo LMFAO rocks the house.

Thursday and Friday: This is the triumphant return of Hofesh Shechter, whose “Political Mother” made an overwhelming impression on Korean audiences in 2010. Hofesh Shechter is one of the UK’s most hotly tipped young choreographers - delivering supremely physical dance with a young, urban feel. “In Your rooms/Uprising” is a restaging of his two breakthrough works, described as “the most important new dance work since the millennium” by the Observer. Highly charged with energy and intense live music, you will experience a truly unique contemporary dance gig, which is irresistibly vibrant.

April 5 to 8: The Universal Ballet Company will perform its version of “The Sleeping Beauty,” a timeless classic that is one of the most famous in the ballet canon. Based on Charles Perrault’s tale “The Beauty Sleeping in the Wood,” the ballet was choreographed by Marius Petipa, composed by Tchaikovsky and premiered in 1890 at the Mariinsky Theater in St. Petersburg, Russia.

Singer Ock Joo-hyun and comedian Park Joon-hyung team up with director Lee Ji-na (“Gwanghwamun Younga,” “Evita,” “Hedwig”) to stage the production. Yoon Il-sang, well known for composing some of the greatest K-pop hits of the 1990s, including songs for Turbo, DJ Doc, Cool, Kim Bum-soo and Kim Gun-mo, also contributed his talents. The musical stars Lee Young-mi, who has starred in numerous musicals including “Jekyll and Hyde” and “Hedwig.”

Performances start at 8 p.m. on Tuesdays through Fridays; at 3 and 7 p.m. on Saturdays; and at 2 and 6 p.m. on Sundays. There are no performances on Mondays.

Bae released some 300 songs - most notably “Foggy Jangchung Stadium” and “I Come Back to Samgakji” - when the Korean pop-music scene was a mix of Japanese and Western influences.

Although Bae passed away at age 29, Koreans still remember him as the a symbol of the era.

To June 27: “Jami” means “good food with a lot of nutrition” as well as “fun” in the Jeju dialect. Admission to the show also includes a menu of Korean dishes and traditional tea.