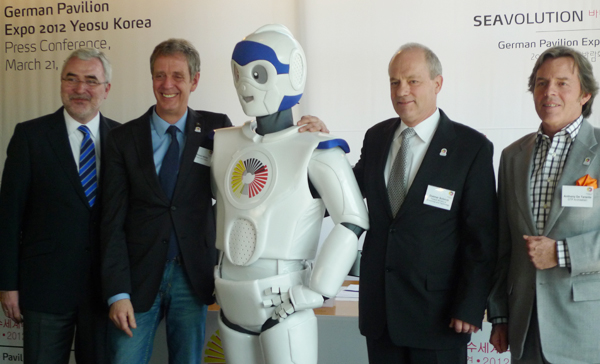 Delegates from the German pavilion for the Yeosu Expo pose with humanoid robot Han-S at a press briefing held in central Seoul yesterday. By Lee Ho-jeong


Germany unveiled the concept for its ambitious pavilion at the Yeosu Expo - called “seavolution” - which opens in less than two months.

“The world expo has a history of 160 years, starting with London in 1851,” said Dietmar Schmitz, Undersecretary of Germany’s Federal Ministry of Economics and Technology, during a press briefing in central Seoul yesterday. “World expos have been the venue for introducing new technology and innovative architecture such as the Eiffel Tower displayed at the expo in Paris in 1889.”

Schmitz said the purpose and goals of the world’s expos have gradually changed through the decades. After World War II, expos dedicated themselves to topics that would grab the interest of the public at large instead of being exclusive to certain industries.

“Today the expo’s topic and agenda are focused on solutions for a better future for humanity,” Schmitz said. “It has become a venue for exchanging information on a wide range of areas including research and technology, economics, communication, culture and entertainment.”

The German pavilion’s “seavolution” theme highlights an eco-friendly evolution of the ocean.

“What we tried to do through the pavilion was to focus on the close relationship between the ocean and humanity,” said Robert Muller, managing director of Facts and Fiction, a German marketing and consulting agency that worked on the concept development of the pavilion.

“The logo of the pavilion was designed in a shape similar to the chambered nautilus, which is a rare species today, and is in gold, red and black, the national color of Germany” Muller said.

Anthony de Taranto from GTP Architekten, a German architecture firm, said the pavilion was designed to give a visitor the experience of entering the ocean from the beach to a deep abyss, where the main theater is located.

The pavilion starts with a preshow of various images of beaches in Germany. The first theme booth has a computer in the form of a beach chair, a common sight on German shores.

On monitors, information about different beaches across the globe and German industries related to the ocean, such as shipbuilding, are provided.

In other booths, information on oceans and ocean resources are displayed along with 3-D imagery.

The main show at the theater shows what the future of the deep ocean will be like when men pioneer into its unknown territories. The animated film is four minutes long.

The Germans are also using smartphone technology to entertain visitors.

“Korea is famous for smartphone usage,” Muller said. “At the expo there will be long lines so we decided to provide interactive games that the visitors can enjoy. On a screen on the pavilion wall a visual image will appear asking questions about Germany. Those who get all the answers right will be awarded gifts.”