Ajumma entrepreneurs take on the world and win

Ajumma entrepreneurs take on the world and win

Before starting her own business in 1999, Ha Hyun-young said she died a little inside every day that she was home as a young, 30-something mother of two boys.

“I was embarrassed that I had no skills and wasn’t able to support myself financially,” she said at her office in Dogok-dong, southern Seoul.

Ha, now 50, is the founder and CEO of landscaping company Hayoung Green, which became known for its flower installations at the Blue House.

The word ajumma (a local term addressing middle-aged housewives) conjures up many negative images in Korean society, whether it be of a lady shoving people on the subway to get a seat, bragging about her children or bargaining relentlessly regardless of time, place or appropriateness.

This may be the typical caricature of an ajumma, but after the global financial crisis of 2008, it was these women who stepped up to the plate and played a large part in reinvigorating the local economy.

In general, the number of working women here has inched up steadily in recent years.

“In order to financially support their families in the aftermath of the global financial crisis, more women in their 50s are seeking job opportunities,” the Samsung Economic Research Institute said in a report last year.

But while many of these women are seeking jobs, there is another group of middle-aged women who have decided to take matters into their own hands and launch their own businesses.

The most recent data from the National Tax Service put the number of local entrepreneurs at 962,000 as of 2010. Close to half of them, or 47 percent, were women and of them, the majority were middle-aged women in their 40s and 50s. The average age of female entrepreneurs in Korea, according to the Small and Medium Business Administration, is 43.

“It is very difficult for middle-aged women to find jobs, as many of them have little or no experience in the workforce after being busy with taking care of their families,” Kim Youn-joong, a business consultant at the Nambu Women’s Development Center, said. “For many of these women, entrepreneurship is becoming a better option.”

The Korea JoongAng Daily met with three middle-aged female entrepreneurs who stamp a proud “A” in ajumma. 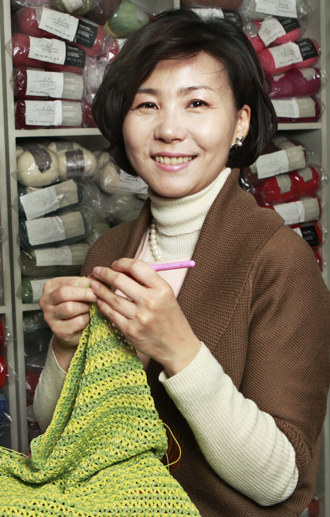 As she told the story of her first attempt at a bank loan, Song Young-ye, the founder and president of knitting company Banul Story (“banul” is “needle” in Korean), stopped for a moment, holding back tears.

When Song was preparing to launch her business 13 years ago, she went to the bank for a small loan but was taken for a liar by the manager.

“My husband’s business went bankrupt during the Asian financial crisis in 1997. The bank manager thought that I was trying to get a loan in my name instead of that of my husband, who had fallen into the ‘delinquent borrower’ category, in order to salvage his business,” Song said at her office in Myeong-dong, northern Seoul.

“They wouldn’t believe that an ajumma like me was planning on starting a business. I didn’t know why I had to listen to these strangers tell me I was a liar and a nobody. I cried at home for days after that.”

The incident, however, didn’t stop Song from pursuing a business of her own, and in 1998, she launched a Web site that provided knitting texts and sold related products including needles and thread.

“Opening the site exposed me to the outside world and to people whom I would otherwise never have met,” she said.

She is the first to admit that she had “no clue about the finance part of starting a business.” In fact, Song didn’t even see the first 4 million won ($3,546) she made through her Web site because she didn’t know how to claim her earnings through the connected online service site she used.

Still, Song said the road to success was far from a level one for her and she often faced discrimination as a female company director.

“Our products were sold at the main branch of Lotte Department Store in Seoul for a short time. But the buyers there kept insisting that we send ‘male employees who could drink well’ and the friction started from there,” said Song, adding that the company left Lotte after two months.

But that wasn’t the main challenge for Song during this period.

“When I started the company, my children were still in elementary and middle school and didn’t understand why I had to be away from them. I felt so guilty leaving them to take care of my business,” she said.

“But now, they tell me how proud they are of me. Recently, my youngest daughter even wrote a paper about my business for her university economics class.”

By mid-2000, Banul Story had more than 150 branches across the country. It has accrued a steady 3.5 billion won in sales each year for six to seven years straight.

Meanwhile, she’s published several books under her name on knitting, some of which have been translated into Chinese and sold in China.

“Now, I make much more than what my husband makes!” she said, laughing. “Through this business, I think I realized a part of myself that I had never guessed was inside me. It’s hard work but now that I’ve done it, I can’t imagine my life without this business.” 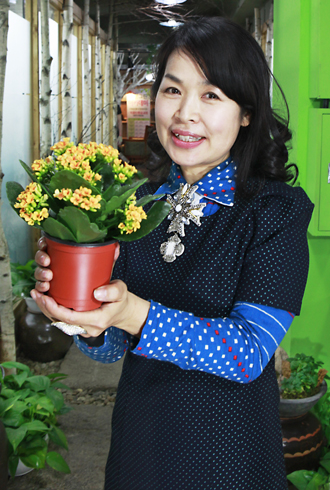 After 15 years of being a homemaker, Ha Hyun-young was ready to face the real world.

“I would read about successful female business leaders in magazines and I felt so envious. Then I would look at myself in the mirror and feel ashamed and helpless,” she said.

“Raising two boys was rewarding, but when I was alone at home, I died a little inside every day. I think that secretly, I always wanted to be an entrepreneur and be in charge of my own business.”

With the less than 5 million won she had saved up over the years, Ha started a small flower shop within Yangjae Flower Market in southern Seoul in 1999.

On top of operating the shop by herself, she did research on flowers and plants, vigorously networking in the sector during her free time.

Ha’s hard work paid off, and the shop earned more than 3 million won per month at its height.

The shop’s success led her to launch an interior landscaping company, Hayoung Green, in 2001.

Under its motto of a “green life,” the company provides landscaping services for companies and individual homeowners. Ha now has 20 employees working for her.

The company has steadily been making a name for itself with large-scale projects for regional expos and festivals including Samcheok International Cave Expo Korea and Korea Floritopia, an international flower festival held on Anmyeon Island.

But it was the company’s flower installation around the fountain in front of the Blue House that put it on the map, making it a market leader in the 6.5 trillion won local landscaping market.

Along with her core business, she also operates Hayoung Academy, which offers classes on interior landscaping.

The CEO said that her goal through Hayoung Academy is to make it easier for others, especially homemakers like herself, to launch their own businesses or start a career in this field.

“I had to learn the hard way and research everything by myself. But I want the women who come after me to have as much knowledge as possible before stepping into this world,” she said.

Ha said that this is the happiest she’s ever been in her life.

“I got married when I was really young, when I was just 23 years old, and I didn’t know anything apart from staying at home and being a wife and mom until this business came along,” she said.

“There is a saying in Korean - a household goes to ruin if the hen sings [meaning that if a woman is more dominant in the household, the home goes to ruin].

“But I think that a household where the hen is silent is the one with the problem.” 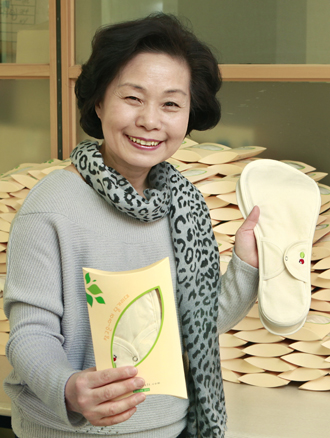 When her husband passed away 10 years ago, Hong Ok-joo was suddenly thrust into the role of breadwinner and lone caretaker of her two sons.

“It was devastating. I wanted to pursue writing poetry but after my husband passed away, I needed to make money and take care of my family,” she said at her office in Mapo-gu, northern Seoul.

As an active member of Green Korea’s Incheon division, Hong said she had always been interested in environmental activities.

“As devastated as I was, there was a part of me that thought, this is my chance to make a difference and be brave,” said Hong.

She sold her sole asset, her apartment, and launched I ECO, which sells washable cotton menstrual pads, in 2006, after several years of research on similar products in North America and Europe.

“Looking back, it was probably an imprudent, rash thing to do. But I wanted to make money selling a product that I was proud of, that isn’t harmful for the environment or to human beings,” she said.

“To make up for my inexperience, I really had to pay my dues. I had to do everything by myself, from learning the basics of business through entrepreneur classes to studying raw materials to make my products and finding factories.”

With no business background or concrete finances, the CEO said that the company had a shaky start and faced closure numerous times after copycat products started appearing in the local market at cheaper prices.

“We had quite a media buzz going for us when we first launched, but soon, other companies with copycat products were replacing us in department stores and organic shops,” said Hong.

“The company was in the red for the first four years. I had to fire all my employees at one point and move the office to another location,” said Hong.

After the grueling first four years, Hong said that she decided to start over. She strategized with employees on securing different types of vendors, promoting her products aggressively and being more active with online sales. Last year, I ECO saw 300 million won in sales and the company expects to earn twice that amount within a few years.

The company is also selling in Japan and Australia, and Hong said she plans to expand the business to other countries throughout Asia.

“Contrary to what many people assume, there are many advantageous reasons for a company to have a woman as a leader. I guess the big obstacle for women would be balancing their family life with their business, and I was lucky in that sense because my children were so supportive,” she said.

“Though even during these times, when so many women are holding high positions and running companies, it still amazes me that some bank managers refuse to give me a loan because I am a woman,” she said.