This year, SK Group aims to increase its exports by utilizing its unique research and development system, dubbed R&BD+E. 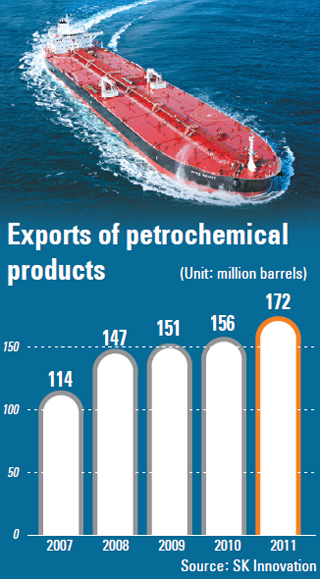 SK Group, which owns Korea’s No. 1 telecommunications company, is more recognized for its domestic service businesses rather than being a manufacturer contributing to the country’s exports. So it was a surprise earlier this month when the third-largest conglomerate said that exports of its seven manufacturing subsidiaries - SK Innovation, SK Energy, SK Global Chemical, SK Lubricants, SKC, SK Chemical, SK Networks - accounted for 70 percent of their total sales in the first two months of the year.

The family-run group has now set an ambitious goal: to become a “genuinely global business” by increasing exports and expanding operations abroad.

“We aim to take a third quantum jump this year with our unique R&BD+E system,” the company announced this week.

The R&BD+E system - which stands for resource and business development plus engineering - is supposed to minimize risks in starting new businesses through close scrutiny by engineering experts.

According to SK Group Chairman Chey Tae-won, successful businesses are made when they are combined with state-of-the-art technology, the group said.

“Any company can do mergers and acquisitions or make investments, but we have to secure technology in order to reap greater profits than that,” Chey said. He has long emphasized a technology-oriented approach for the group.

Since Chey first introduced the new R&D system, the manufacturing units of the group have integrated their R&D and engineering workforces.

“We have achieved some fruitful outcomes from adopting the new R&D system,” the company said.

SK Energy recently developed a technology to remove salts from crude oil, which will allow the import of crude oil with high concentration of salts. SK Lubricants has registered a patent in 23 countries for the world’s first technology to produce premium lubricants even in extremely cold areas.

SK Global Chemical has completed a Naphtha cracker that uses a catalyst rather than high temperatures. SKC, a film and chemicals maker, has applied for five patents for a film made from corn with enhanced adhesiveness.

“It was possible to make all these achievements, because we do R&D from a business perspective,” an SK official said.

The group’s exports will be boosted after SK Telecom, the group’s telecom unit, finalized the acquiring of Hynix Semiconductor last month, the second largest chipmaker in Korea. SK has gained a new growth engine to add to its energy and telecom businesses.

Hynix has both technological prowess and a global presence. Those two assets are being pursued by SK for the next few years, the group said.

SK Group has unveiled its largest-ever investment plan for 2012: 19 trillion won, more than six times the 3 trillion won invested a decade ago.

The SK chief’s dream is to make Korea resource-rich one day. Chey has been selling Korea as an “oil producer without any resources” since 2004. “No business or country can prosper without resources,” he said.

Of the planned investments, 2.1 trillion won will go to resource development. It is the first time the group will put more than 2 trillion won into the business.

In order to help the country secure resources, Chey is busy visiting remote areas where untapped resources exist, such as Brazil, China, Malaysia and Australia.

Last week, Chey was at a coal mine 40 meters (131 feet) below the ground in Australia, dressed in orange overalls and a mining cap.

“SK will continue writing a successful story of resource development by acquiring this coal mine,” Chey said.

It was announced that SK Networks purchased a 40 percent stake in Cockatoo, an Australian coal company that owns 13 mines in Queensland and New South Wales.