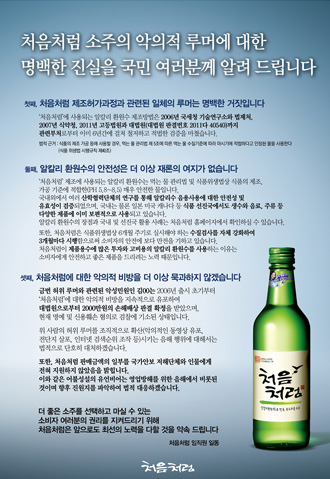 The full-page ad that ran Monday.

Lotte Chilsung Beverage, the country’s top soft drink and liquor company, ran a front-page ad in major newspapers Monday to refute rumors that one of its soju products was bad for customers’ health.

And some rumors said the drink was only for leftists.

“The rumors were so negative that we had to amend what’s been falsely stated,” said Yoon Su-han, director of Lotte Chilsung Beverage’s public relations team.

According to the company, a crank surnamed Kim has been spreading rumors about the product’s safety since its release, and after a lawsuit, was ordered to pay the company 20 million won ($17,720) in damages by the Supreme Court last year.

Early this month, Consumer Television, a cable TV channel, aired a documentary saying the alkaline water-based soju can cause muscle pain and skin trouble if drunk over an extended period of time.

The channel took the video off its Web site about a week later and posted a video with evidence that the alkaline water wasn’t harmful and may be good for you.

“We decided to take the video down after we realized it was giving some unexpected advantage to other soju makers,” said Lee In-woo, general manager of Consumer Television’s programming team. “And then we decided to provide a three-minute video about possible counterarguments to help consumers make better judgments.”

It said it’s been confirmed that alkaline water is safe and helps stomach troubles by the Korea Food and Drug Administration.

The International Conference on Food Factors also had a presentation on its benefits last November in Taiwan.

However, the company is currently not using its “better water” for other beverages.

“The alkaline water regenerator and other facilities cost a lot to operate,” said Lee of Lotte Chilsung.

He said alkaline water is only used in Cheoeum Cheoreom soju, not in any other Lotte Chilsung products.

Another rumor is circulating that Cheoeum Cheoreom soju is made for left-wing drinkers.

The company said in its ad that its alcohol has no political bias. The product’s logo uses calligraphy by Professor Shin Young-bok of Sungkonghoe University, who was sentenced to life in prison for being a leftist in 1968, but Shin gets no payments from the company. Shin was pardoned in 1988.

Doosan Liquor, which launched the brand before selling it in 2008, was known to have funded some scholarships at Shin’s school because Shin refused to receive any compensation for the use of his calligraphy.