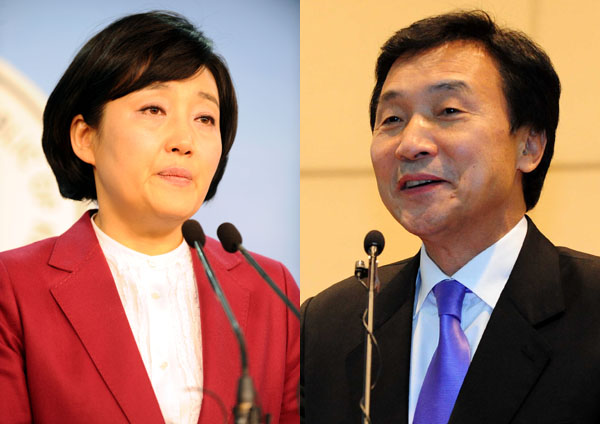 
The nomination war has appeared to have done serious damage to the main opposition Democratic United Party as its former chairman refused to head the election campaign and a senior leader quit her position in protest of the unfairness of the candidate selection.

The DUP yesterday officially launched its campaign committee for the April 11 legislative elections, appointing Chairwoman Han Myeong-sook as its head. Other senior politicians were also named as special leaders of the campaign.

Conspicuously missing was Sohn Hak-kyu, the party’s former chairman and a presidential contender. Sohn told local media that he wanted to support the DUP’s campaign as an ordinary member, not a campaign leader. Speculation was high that his decision expressed his displeasure toward the party’s leadership for having treated him poorly during the nomination process.

Representative Park Young-sun also held a press conference yesterday to announce her decision to step down from her post on the DUP Supreme Council. The former veteran TV journalist said she also wanted to resign from her post as the head of the party’s special committee to investigate the corruption of the Lee Myung-bak administration.

In the DUP’s leadership election in January, Park won third place, after Chairwoman Han and actor-turned-politician Moon. Only two months later, however, she decided to give up her leadership role in the party, expressing dissatisfaction over the nomination process.

“Over the past two months, I was in a lot of pain,” Park said. “I felt sorry for the people who have high expectations for the DUP. It was hard to ignore the icy response of people toward the DUP’s nomination process and the public dissatisfaction toward the party’s lack of reform.”

She said she has decided to step down from the leadership post because someone needs to take responsibility to seek forgiveness from the public.

In an interview with MBC radio, Park also complained about what she sees as an unfair nomination process. “Invisible hands were shaking Han,” she said, adding that she felt sorry to see the chairwoman having to bend her principles under pressure.

“The standards were sometimes changed depending on the candidates,” Park said about the nomination process, but refused to identify whom she was referring to as “invisible hands.”

Speculations, however, were high that she was referring to former National Assembly Speaker Kim Won-ki and senior advisors Chung Sye-kyun and Lee Hae-chan, as well as leaders of civic groups and former student activists.

At the Supreme Council meeting yesterday morning, Han tried to mend the internal rupture. “I deeply reflect the party’s failure to meet the public expectations for the nomination and primary processes,” Han said, asking the party to remain united.

“The party has asked them to reconsider their decisions,” DUP spokesman Park Young-jin said about Sohn and Park’s moves.