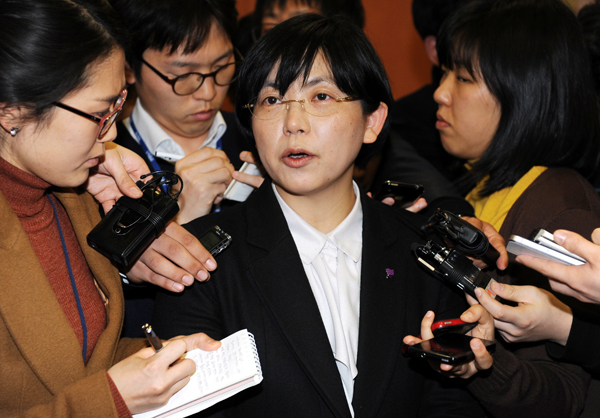 Lee Jung-hee, center, co-chairwoman of the Unified Progressive Party, speaks Tuesday about a rigged telephone survey during the primary. [NEWSIS]


Pressure grew on Representative Lee Jung-hee, a co-chairwoman of the Unified Progressive Party, to surrender her nomination to run in next month’s general election in a Seoul constituency following a revelation that Lee’s staffers had rigged a telephone survey during the primary. 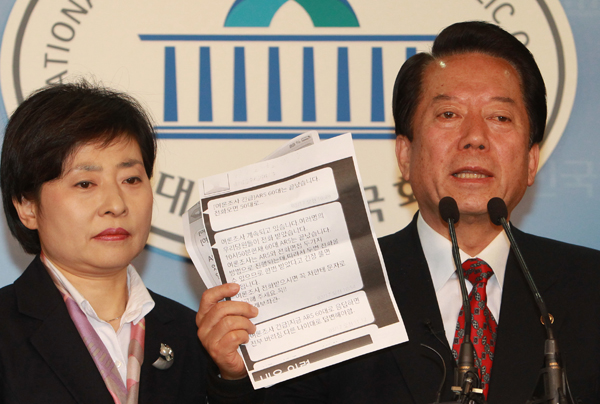 An Internet user, however, claimed Tuesday that Lee’s campaign asked voters to lie about their ages to skew a telephone survey that was part of the primary process. The user posted text messages allegedly received from a person on Lee’s staff.

The messages were sent from Jo Yeong-rae, an aide to Lee.

Following the revelation, Lee held a press conference Tuesday evening and apologized, promising to punish her staffers. “I am willing to go through another primary if the messages influenced the outcome,” she said.

“She must take responsibility for the unlawful actions,” Kim Hee-chull, her defeated rival, told the JoongAng Ilbo. “Asking for another primary is seeking a pardon. Candidate registration begins Thursday, so how can we have another primary?”

Kim also held a press conference yesterday and said he will leave the DUP and run independently unless Lee gives up her nomination.

The Democratic United Party, Unified Progressive Party and New Progressive Party jointly held primaries over the weekend in 78 constituencies nationwide, and the UPP claimed victories in 11 districts. That alliance, which is deemed critical to defeating the ruling Saenuri Party in the April 11 election, is now endangered by the scandal surrounding Lee.

“She must assume responsibility,” DUP spokeswoman Kim Yoo-jung said in a statement, while Chairwoman Han Myeong-sook said the alliance between her party and the UPP is in jeopardy if the problem is left unsolved.

Several other DUP politicians defeated in the weekend primaries say their contests also had iffy survey results, including primaries won by the UPP’s other co-chairwoman, Sim Sang-jeong, and party spokesmen Roh Hoe-chan and Cheon Ho-seon.

In Gyeonggi’s Ansan-Danwon A District, where the DUP’s candidate was defeated by the UPP’s Cho Seong-chan, the outcome was also challenged. “Our candidate lost in the race by three votes,” DUP spokesman Shin Kyoung-min said. “But the survey included responses of five people who belong to a different constituency.”

Lee and the UPP insisted that the matter was not grave enough for her to give up her candidacy. The UPP also said the DUP was destroying the alliance.

“Finding out the seriousness of the problem and making a corresponding response is a responsible attitude,” Lee said in an interview with MBC radio yesterday. “The concerned text messages were sent to only about 200 people, so it is responsible to ask for another primary, rather than surrendering the candidacy.”

She also posted a Twitter message yesterday stressing that controversies have only taken place in constituencies where her party won. “No one in the UPP has made a challenge,” she wrote. “We even accepted a DUP candidate against whom a petition was filed to the prosecution.”

The ruling Saenuri Party did not miss the opportunity to criticize the liberal alliance and question the character of Lee. “Although clear evidence was seen of an illegal primary, she shamelessly demanded another primary, blaming her staffers,” Lee Sang-il, spokesman of the Saenuri Party’s campaign headquarters, said yesterday.