Be wary of who you Kakao Talk to

Be wary of who you Kakao Talk to 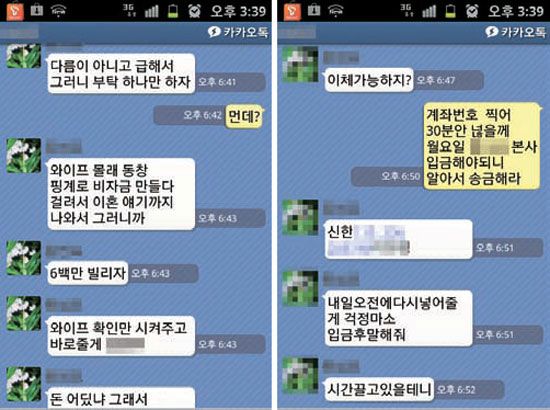 Kakao Talk, one of the most popular mobile messaging services in Korea, is no longer safe from messenger phishing.

A 52-year-old businessman surnamed Jang received a message that asked him to lend money to his friend through Kakao Talk on March 2 while he was visiting China on business.

Jang said that his friend desperately asked him to wire 6 million won ($5,300) to his secretary’s bank account, which he told Jang was open under the secretary’s name but owned by his company.

The friend told Jang that he opened the secret account in order to use the money for his affair, but his wife recently found out about the account and accused him of having an affair.

He then requested that Jang wire the money to the secret bank account, complaining about his difficult situation.

“Dude, you’re the only friend who can understand this,” read one of the messages, which Jang showed the JoongAng Ilbo. “I can’t even discuss this because other friends are going to criticize me so badly. I promise I will wire the money back to you as soon as my wife checks the balance and sees that the money wasn’t used for anything.”

Jang believed that it was his friend asking and wired the 6 million won immediately.

“Information that verified my friend’s identity, including his phone number and profile picture appeared while I was speaking with him,” Jang told the JoongAng Ilbo.

However, when Jang happened to look at Kakao Talk about two hours after he wired the money, his friend’s account was gone.

Jang texted the stranger and asked him who he was, but the stranger never responded. Jang called the police immediately, but the money was already gone.

“It’s the first report of messenger phishing committed through Kakao Talk,” an officer at the Seoul Dongjak Police Station told the JoongAng Ilbo. “Many cons have targeted victims by representing themselves as a PC version of the application, but this is the first time someone actually got into a smartphone.”

The case was transferred to the Goyang Precinct Police in Gyeonggi, as the bank account where Jang sent the money was confirmed to be created in Goyang.

“The swindlers are now moving on to mobile applications that operate via smartphones,” Yoon Young-jun, the chief investigator of the Cybercrime Investigation Team at the National Police Agency, told the JoongAng Ilbo. “Users with popular mobile messaging applications such as Kakao Talk and Daum Communications’ My People should be suspicious if someone asks to wire money suddenly.”