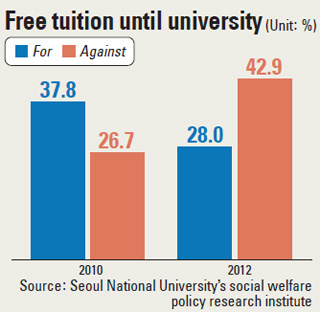 While political parties pour out welfare pledges ahead of the legislative elections, a recent report is showing that public sentiment is lukewarm in supporting promises that would raise taxes.

Ever since the contentious free lunch debate swept the capital city last October, lawmakers affirmed that the public was in favor of “universal welfare” instead of “selective welfare” that only offers help to those in low-income brackets.

The report showed that 45.9 percent of people favor selective welfare as of this year, while those supporting universal welfare turned out to be lower at 28.4 percent.

In particular, the survey showed 42.9 percent of people are opposed to a welfare policy that would provide free education until college, while only 28 percent agreed.

“People have started to respond cautiously to the expansion of public welfare as they are acknowledging that welfare and taxation are directly linked, as seen from the European financial crisis last year,” said Cho Won-dong, president of the Korea Institute of Public Finance.

The survey also showed that Koreans are relatively less satisfied with their class status.

On a scale of 1 to 10, with 10 being the lowest class, responses averaged at 6.38. The higher the average, the more people think they belong to the lower class.

According to the survey, 9 out of 10 Koreans said the gap between the rich and the poor is too wide in Korea and 7 out of 10 said the government should be responsible for finding a solution.

However, only 33.3 percent said the country should raise taxes to increase welfare services for those in the lower-income bracket.

Though the survey shows Koreans are hoping for a redistribution of wealth, promoting universal welfare for social integration should be done after cautious thinking, said Ahn Sang-hoon, a social welfare professor at Seoul National University.

Meanwhile, politicians have suggested as a means to cover costs reallocating government spending to what is deemed necessary, namely welfare.

Both the ruling Saenuri Party and the opposition Democratic United Party have said the government will find the money to fund welfare by cutting “unnecessary spending.”

However, policy makers are in a dilemma because of the 325 trillion won ($287 billion) budget allocated for this year. Reducing spending is not as easy as it sounds, as the budget is already at the minimum the country can spend.

As for the Seoul Metropolitan Government, for example, it still hasn’t been able to secure the 106.8 billion won to pay for day care subsidies given to parents with children up to 2 years old from this year.

Though 106.8 billion won is around 0.5 percent of the city government’s total budget, it is still having trouble coming up with the money.

Government officials also note that there is no room to downsize various tax reduction policies to expand tax revenue or the national budget.

A recent government report showed that “in the case of next year, the increase in tax from scrapping the income and corporate tax cut plan [3.3 trillion won] is less than the decrease in tax revenue from extending various tax exemption programs [6.7 trillion won].”