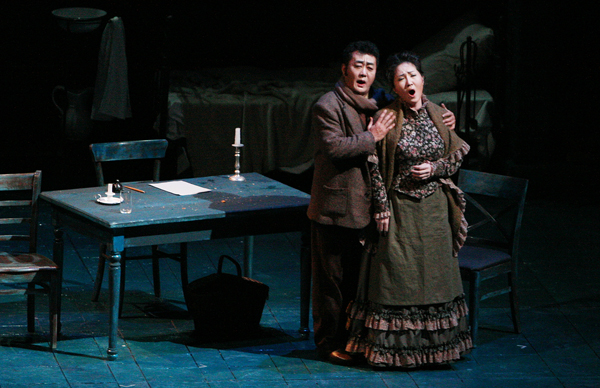 Performers playing Mimi and Rodolfo sing together during a showing of “La Boheme” in 2007 at the Opera House of the Seoul Arts Center in southern Seoul. The opera will again be shown from April 3 to April 6 at the same venue. Provided by the Korea National Opera


The Korea National Opera will take the stage this April to perform one of Giacomo Puccini’s career-defining works, “La Boheme.” The opera presents the four-act Italian classic in collaboration with the Seoul Philharmonic Orchestra, playing under the baton of renowned maestro Chung Myung-whun.

Marco Gandini, director of the upcoming performance, said he is looking forward to working with Chung again, adding that the Korea National Opera’s performance of Giuseppe Verdi’s “Simon Boccanegra” last year was well received “thanks to Chung’s thoughtful and excellent interpretation of the score.”

Gandini said that he and the performers are “working hard together to verbalize the Italian language.”

“[The vocalists] are already excelling in their expressiveness as well as their abilities in the Italian language, despite it not being their first language,” the director said.

According to the Korea National Opera, Puccini, who had been a poor and starving artist himself, vividly depicts the struggling artist’s emotions through the opera. It has been said that Puccini began “crying like a little child” after finishing “La Boheme.”

The opera, which romanticizes the passionate struggles of the artistic class, tells a story of artists in the back streets of Paris in the 19th century through the love affair between a poet and a woman with tuberculosis.

Soprano Hong Ju-young, who will perform as heroine Mimi along with legendary soprano Kim Young-mi, said she can empathize with her character’s feelings as she herself struggled with a serious illness.

“I suffered from pneumonia about two years ago while I was studying in Italy to pursue my dreams, and I can still feel how painful it was whenever I cough,” Hong said.

“Such an experience, I believe, has helped me to focus on Mimi’s condition, and I hope such a painful experience will help me in expressing her character.”

Hong already has experience with the character, playing the lead role at the Carlo Felice Theater in Geneva last year.

Tenors Kim Dong-won and Kang Yo-sep will play Rodolfo, the poor poet who later falls in love with Mimi.

Meanwhile, Loic Thienot, who works as an architect, director and stage designer in France, is taking charge of the stage for the upcoming show.

According to Thienot, his biggest concern was how to design the space for “La Boheme” so that it accurately depicts the bohemian lifestyle.

“I studied the story with the director and thought deeply about how to depict the young artists’ lives in dire poverty,” said Thienot. “After deep consideration, I decided to downsize the stage to express poverty.”

This year’s performance will also be “safer” than the latest one in 2007.

During the run in December 2007 at the Opera House of the Seoul Arts Center, a fire broke out on stage about 10 minutes after the performance had started, leading to the evacuation of some 1,800 people, including audience members, performers and the crew. The fire was from a fireplace that was used as a prop on stage.

During one scene, an actor starts a fire in the fireplace. According to organizers, this scene will remain in the performance, but instead of lighting up a real fire, they will use a prop that looks like a fire.

Puccini’s “La Boheme” is second on the list of the world’s most-performed operas, behind only his own “Madame Butterfly.” The opera should be familiar to Broadway fans, as it was the main inspiration for Jonathan Larson’s smash-hit “Rent.”


“La Boheme,” which has been selected as the performing art work celebrating the 20th anniversary of diplomatic ties between Korea and China, will first be performed at the Opera House of the Seoul Arts Center in southern Seoul from April 3 to 6 at 7:30 p.m.

The team will then visit China in May to perform at the National Center for the Performing Arts in Beijing. Tickets range from 10,000 won to 150,000 won. For more information, visit www.nationalopera.org or call (02) 586-5282.