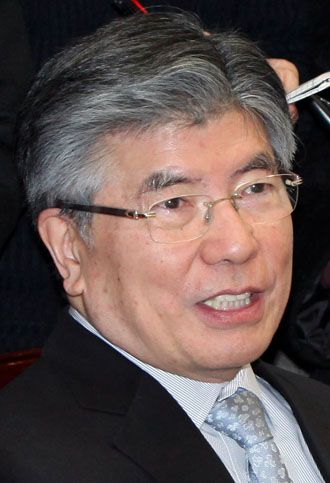 The central bank earlier this month opened a new communication department of over 30 employees separate from its existing public relations office.

The order from Kim Choong-soo, Bank of Korea governor, was simple: Communicate with the financial markets and the public so they can better understand monetary and macroeconomic policies.

But how to do that? People assigned to the new department were confused as to what they were supposed to do.

“The governor assigned us to ‘communicate,’ ” said a BOK official assigned to the department last month.

In April, Kim will celebrate his second anniversary as the head of the nation’s central bank. Recently he has been emphasizing the need for better communication with the public.

Yet central bank watchers are still dubious that Kim’s sending the right signals.

Although the governor has been given good marks for expanding Korea’s role in the global financial community and enhancing cooperation among central banks across the globe, his accomplishments in signaling the market about monetary policy and managing inflation are not praised.

Kim is famous for saying “There will be no turning right after signaling left,” even though that’s exactly what he has done as governor.

By starting a communication department, Kim is trying to address criticism that the BOK isn’t fully understood by the market and the public.

Kim has brought different departments under one roof for efficiency, such as economic analysis and data report management.

At a recent workshop, the governor told the heads of departments that accountability and transparency can only be achieved via communication.

The governor said that communication can only be meaningful when it is two ways, especially in times of economic uncertainty.

He also stressed that in most cases, miscommunication results from a lack of understanding of economies.

Industry insiders say although a communication department has been launched, expectations for it remain low since the governor has a history of saying one thing and then contradicting himself.

In the second half of 2010, misguided signals from the BOK started to confuse the market.

In July, the market was expecting the bank to freeze interest rates for another month since inflationary pressure was low while external uncertainties in overseas markets lingered.

But the central bank unexpectedly raised the rate 0.25 of a percentage point.

In the following month, the central bank froze the key rate on grounds of taming inflation.

“Stabilizing consumer prices would be a very important project,” Kim said after the monetary policy meeting.

Not long after, he told reporters that although the central bank was an institution responsible for consumer price stability, it could not ignore economic growth.

“Although consumer price stability is important, I plan on maintaining balance,” Kim said.

In the following September and October, the interest rate remained frozen, which was the opposite of what the market expected as inflationary pressure was building up. The governor defended the decision by saying that although consumer prices are a significant factor in monetary policy, other factors could not be ignored.

As the signals coming from the governor became unreliable, the market started to move in directions independent of the central bank’s monetary policy.

In November 2010, although the central bank raised the interest rate by 0.25 of a percentage point, the yield on three-year Treasury bonds fell 0.15 percent from the previous day.

The market began to dismiss signals coming out of the central bank and started to rely more on the finance ministry.

In March 2011, SK Securities released a report entitled “The Bank of Korea is no longer the interest of the bond market.”

SK Securities analyst Yum Sang-hoon wrote in the report, “The Bank of Korea will likely raise the rate in the second and third quarter, but since the move is predicted, the influence [from the central bank’s monetary decision] will be limited. The bond market is no longer interested in the Bank of Korea.”

Kim defended himself from accusations that he was failing in communicating with the market and said it was not appropriate for the market to expect the monetary policy committee meeting to systematically raise the key borrowing rate.

Hyundai Securities analyst Park Hyuk-soo wrote in the report, “Although the judgment of the market is not always right, it is hard to tell what the [central bank’s] monetary decisions are based on.”

Some speculated that the central bank would raise the key interest rate in the second half, while others said the loose monetary policy would continue throughout the year.

“No institutions had ever released a projection of an entire year before Kim headed the central bank,” said a financial industry insider who requested anonymity. “This indicates how far the central bank’s reputation and credibility have fallen.”

Some even wonder if the governor has forgotten the role of the central bank.

“Sometimes I wonder if he’s finance minister or an economics professor,” said an analyst.

Kim is an economist to the core. Specialized in international finance, Kim has spent most of his years in research centers including the state-owned think tank Korea Development Institute and the Korea Institute of Public Finance. He was also the senior economic secretary at the Blue House under the Lee Myung-bak administration and the ambassador to the Organization for Economic Cooperation and Development.

Some analysts say the central bank needs to give firm direction and clear signals while focusing on its main role in taming inflation.

“Even if there are other factors [such as a global crisis], the central bank’s main role is to focus on keeping inflation from spiking,” said Lee Phil-sang, a Korea University professor.