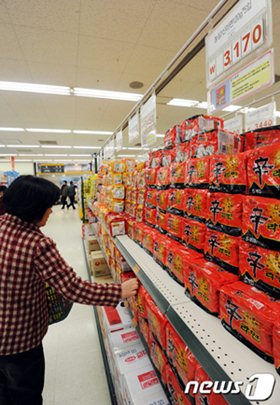 “Because there is no great quality difference from one ramen product to another and ramen customers are sensitive to prices, a company can easily see sales drop if it raises the price on its own,” said the commission.

The four companies colluded under the lead of the nation’s top instant noodle maker Nongshim, the commission said.

Nongshim had around 70 percent of the ramen market in 2010.

Nongshim set the price of its product first and then shared the information with its competitors so they would raise prices to the same level.

The collusion was particularly close on the most popular brands: Shinramen by Nongshim, Samyang Ramen by Samyang Food, Jin Ramen by Ottogi and Wang Ramen by Korea Yakult.

Nongshim raised the price of Shinramen to 750 won from 650 won on Feb. 20, 2008. The second-largest ramen producer, Samyang Food, matched that raise on March 1.

The collusion continued through six price increases of the major ramen brands, the commission said.

“We are a company with a 70 percent market share, so we had no reason to discuss price hikes with competitors,” said Nongshim. It said sharing product-related information with competitors is normal.

A Samyang Foods spokesman refused to comment on the fine.