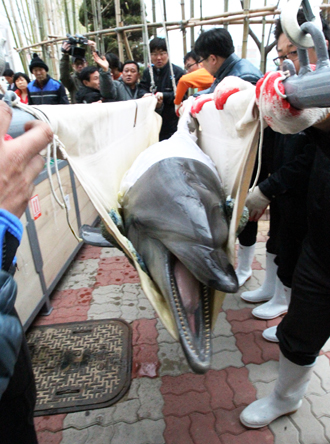 Officials at the Ulsan Whale Maritime Experience transport a 5-year-old dolphin to an aquarium in Nam District, Ulsan, yesterday. The Ulsan City Government said they have purchased a pair of female dolphins from Japan, each worth 200 million won ($177,200), in order to put them in a dolphin show after two to three months of training. Some civic group members organized a rally at the office of the city government, demanding them to stop abusing animals. Recently, the Seoul Metropolitan Government said they will release 13-year-old Indo-Pacific bottlenose dolphin “Jedol” after facing strong protests from civic and animal protection groups over animal abuse. [YONHAP]