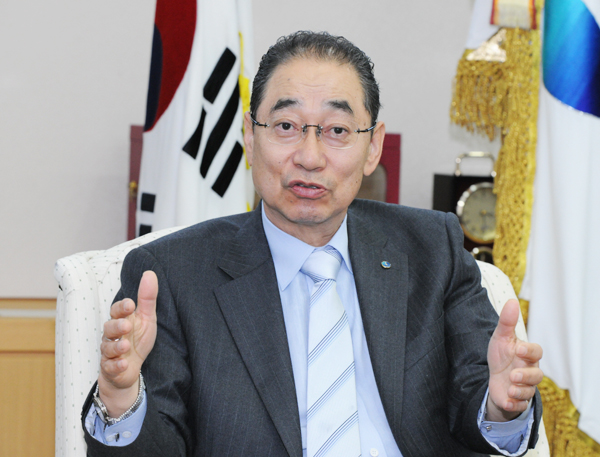 
Kogas has been continuously participating in the natural gas businesses of exploration and development. It has also been expanding its investment area for 10 years to Yemen, Indonesia, East Timor and Myanmar.

When CEO Choo Kang-soo came in charge in 2008, Kogas announced the slogan “Global Kogas growing together with customers” and concurrently strengthened its overseas business and promotion. Specifically, it set up resource departments and reorganized the group into a vertical system of exploration, development and production in midstream and downstream business, breaking away from its former orientation toward the sale and import of natural gas.

Kogas has also reinforced its overseas business organization. Based on such efforts, in 2009 it was awarded the Iraq Zubair oil production project, one of the world’s seven remaining major oil fields, and in 2010 it also competed with major companies in the Akkas natural gas field bid, ultimately winning the deal. Regarding the latter, Kogas participated as the management company for the first time and became more competitive in the E&P field.

Furthermore, the company is showing great results in the new, nontraditional gas business, such as with gas clathrates, coal bed methane gas or shale gas, which have five times the energy of traditional gas.

In 2010, with the Canadian nontraditional gas company EnCana, Kogas reached an agreement to jointly explore and develop three natural gas fields in the Horn River and West Cut Bank. These areas are up-and-coming spots as nontraditional gas development areas.

Last year, Kogas became the first Korean government company to acquire 20 percent of the total shares of MGM Energy’s Umiak gas field, located in the Northwest Territories of Canada, and has advanced in North Pole resource development. The North Pole is estimated to have 8.6 times the world’s total yearly consumption of buried oil and gas, and Kogas is desirous to acquire the business know-how of MGM Energy to exploit the pure deeps of the North Pole.