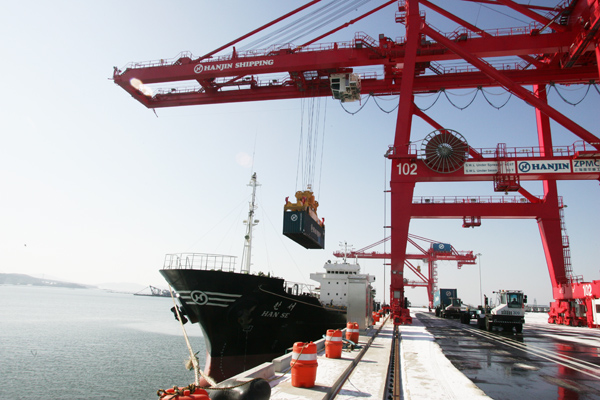 
The Gyeongin Ara Waterway is Korea’s first waterway connecting the Han River with the Yellow Sea. It is expected to create a new waterfront culture and an “ecofriendly”, “green” paradigm in Korea. The Ara Waterway project that K-water is in charge of started to prevent the repeating flood of Gulpocheon Stream area (Incheon Gyeyang, Bupyeong, Gyeonggi Bucheon and Gimpo).

The Gulpocheon Stream basin has sustained huge flood damage because 40 percent of its area is low-lying.

During the heavy rainfall in 2010 and 2011, Ara Waterway played the role of a spillway during flood and prevented floods.

The Gyeongin Ara Waterway will serve as both an ordinary waterway and as a spillway during flooding, which can handle floods up to the 100-year mark. In emergency situations, the Yellow Sea floodgate can also become the spillway, constructed in a much safer way than an ordinary flood channel. In the future, the flood prevention system will be further developed to prevent flood damage.

The Gyeongin Ara Waterway is also expected to contribute in reducing logistic costs, traffic jams and green development. By using the environmentally friendly transportation method of sea shipping, it will absorb the previous logistics volume handled by land and is expected to contribute economically and environmentally by reducing traffic jams on land. Using the waterway, the ships will be able to carry containers equalling the capacity of 250 trucks at once, achieving environmentally friendly logistics and resolving the difficulties of land transportation. In particular, the environmentally friendly logistics center that will be created near Incheon and Gimpo is expected to activate the logistics and regional economic including Gyeongin Port. The Ara Waterway logistics center is located at the best area for transportation connecting a wide area that includes Incheon International Airport Highway, thereby reducing the logistics cost. In addition, by creating street malls, condos, hotels, water parks and other water-centric tourism, leisure, culture and shopping facilities, it is constructing a new concept of the multilogistics center.

From the planning stage of Ara Waterway, experts of tourism and culture participated and planned of a story telling history and culture. Eight spectacular waterfront sceneries are being created and at the entire 18 kilometer Ara Waterway a bicycle road, inline road and pedestrian walk will be created as a parkway, which is expected to become a new tourism landmark. Especially at the Gimpo Port region, metropolitan area’s largest marina will be constructed and become the new center of marine leisure of Korea.