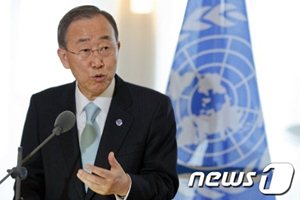 “I am going to discuss the issue with the president of the Republic of [South Korea] in Seoul and I will also engage with other leaders attending the nuclear summit,” Ban said during a press conference in Malaysia.

Ban, one of the 58 leaders attending the March 26-27 summit, is scheduled to meet President Lee Myung-bak in Seoul on Saturday afternoon, according to the Ministry of Foreign Affairs and Trade. In a joint media interview on Tuesday, Lee said he will talk with the leaders of the U.S., China, Japan and Russia about the issue when they gather during the Seoul summit and make joint efforts to persuade the North to call it off.

The five countries, along with the North, are involved in the stalled six-party talks aimed at denuclearizing the North. The North warned on Wednesday that any statement regarding its nuclear program during the Seoul summit would be considered an insult to its former leaders’ stated commitment to denuclearization and thus a declaration of war.

The planned launch of satellite Kwangmyongsong-3 atop rocket Unha-3, which the North scheduled between April 12 and April 16, is widely seen as a disguised test of the enhanced capability of its long-range missiles that could ultimately carry nuclear warheads.

South Korea’s Foreign Minister Kim Sung-hwan told a media briefing yesterday that South Korea shares an understanding with U.S., China, Japan, Russia and other related countries that the North’s rocket launch plan is a violation of an international treaty.

The UN Security Council Resolution 1874, adopted after the North’s second nuclear test in May 2009, bans the North from conducting any test using ballistic missiles. The launch plan “threatens the peace and security on the Korean Peninsula,” Ban said, expressing “deep concern” about it.

The U.S. is warning that the rocket launch could break the agreement made late last month under which the U.S. is to give 240,000 metric tons of nutritional assistance in return for the North’s preemptive denuclearization measures. In the deal, the North promised not to test long-range missiles and other weapons of mass destruction as well as suspend the uranium enrichment program and allow the International Atomic Energy Agency inspectors back in.