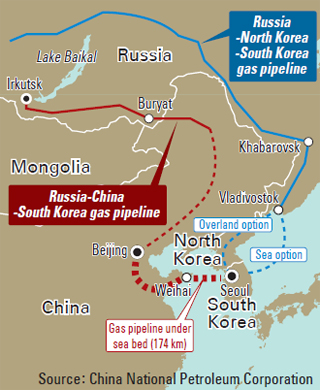 BEIJING - As the project of building a pipeline linking the two Koreas to supply Russia’s natural gas to the South is stalled due to the North’s lack of cooperation, the idea of linking the South to China via an undersea gas pipeline is quickly shaping up.

Jiang Jiemin, chairman of the China National Petroleum Corporation, suggested the idea to Kang Young-won, the president of the Korea National Oil Corporation, during their meeting in Beijing on Feb. 16, according to minutes from the meeting. The JoongAng Ilbo and JTBC acquired the documents exclusively.

“Getting Russian gas through an undersea gas pipeline from Weihai, Shandong, to South Korea is deemed more stable and economical than through North Korea [for South Korea],” Jiang told Kang, the minutes showed.

It would be an alternative for South Korea, which is waiting for progress in the Russia-initiated plan of building a gas pipeline via North Korea for the supply of Russian gas.

Weihai, a city located on the eastern end of Shandong Peninsula, is 174 kilometers (108 miles) away from Baengnyeong Island off Incheon. It is 380 kilometers away from Seoul.

The pipeline that would link the two Koreas under the Russian-initiated project would have a 700 kilometer-long section pass through North Korean territory.

Jiang’s proposal was immediately delivered to related South Korean government agencies, including the Ministry of Foreign Affairs and Trade and the Ministry of Knowledge Economy, according to sources. Those ministries are known to have already entered working-level reviews of the proposal. The Korea Gas Corporation is also in talks with the Chinese company and has started the assessment of the validity of China’s proposal, a source told the JoongAng Ilbo.

According to an industry observer, China believes the pipeline would be mutually beneficial for Seoul and Beijing as the South’s involvement could give it more bargaining power in negotiations over the price of Russian gas.

China is currently negotiating with Russia over gas prices. If the price negotiation is completed, it plans to embark on extending the gas pipeline from Russia to Beijing in three or four years. The current gas pipeline that starts from eastern Siberia in Russia ends in Buryat, near the Russian-Chinese border.

CNPC’s proposal is to extend the pipeline further to Weihai from Beijing and link it to South Korea.

CNPC is a state-run company, and its chairman is wielding influence as big as that of minister-level Chinese officials.

Zhou Yongkang, one of the nine-member Politburo Standing Committee, the most powerful decision-making body in China, also served as CNPC chairman. Paying attention to the name of a specific area, Weihai, observers say that CNPC appears to have come up with the proposal after close consultation with the Chinese government.

Observers say the plan has several benefits for Seoul, including bringing relations between South Korea and China closer. China is already Seoul’s biggest trade partner. It could also press the North to come forward for the gas pipeline project.