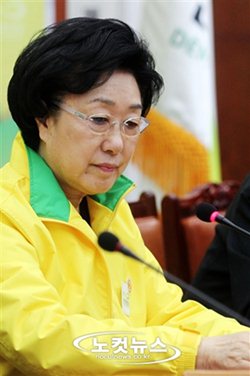 Prosecutors launched an investigation into an aide for Democratic United Party Chairwoman Han Myeong-sook who is suspected of receiving bribes from a preliminary candidate in the upcoming general election.

The prosecutors at the Seoul Central District Prosecutors’ Office yesterday raided the house of Shim Sang-dae, an official of the DUP and a close aide of Han, at 9 a.m. in Seodaemun District, western Seoul, after receiving an investigation request from the Jeonju branch office of the National Election Commission for violations of the election law.

The allegation was brought to the public as Park disclosed the money exchange earlier this month through an interview with the Weekly Dong-A, a magazine published by the Dong-A Ilbo.

According to the interview, Park gave the money to Shim from October to February on five different occasions after receiving a firm promise he would land an important position in the party. Park said the deal happened when Han Myeong-sook was under investigation for allegations of receiving bribes worth $50,000 from Kwak Young-wook, CEO of Korea Express, in 2006.

The prosecutors questioned Park on Tuesday and secured testimony from him about the bribes.

“Shim said that the possibility of Han becoming chairwoman of the DUP is high if she is acquitted from court,” Park testified to the prosecution during the questioning.

“I met Shim through the lawmaker surnamed Han who was a former member of the Uri Party [the predecessor to the DUP], and I met the chairwoman with Shim twice before I gave him the money.”

The prosecutors also summoned Shim to appear at the office for questioning right after the raid.

As the prosecutors raided Han’s aide’s house ahead of the general election scheduled on April 11, liberals accused the prosecution of targeting the leader of the opposition party, but the prosecution denies the suspicion.