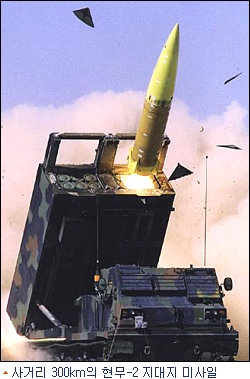 South Korea expects to reach an agreement with the United States in the near future to allow Seoul to possess or develop ballistic missiles that can reach deeper into North Korea, President Lee Myung-bak was quoted yesterday as saying.

Under a pact with the U.S., first signed in 1979 and revised in 2001, the range of South Korean ballistic missiles is limited to 300 kilometers (186 miles) and their payload weight to 500 kilograms (1,102 pounds). Seoul has sought to revise the agreement to match the range of missiles in the North Korean arsenal.

“It is for defense against North Korean attacks at times of contingencies that we say we need to expand our missile range,” Lee was quoted as saying during an interview published in the Dong-A Ilbo newspaper Thursday. “We need an appropriate range.”

The remark came as tensions have risen on the Korean Peninsula after North Korea announced last week it will launch a long-range rocket to put a satellite into orbit, a pretext the communist nation has used before to disguise banned missile tests.

Whenever North Korea rattles its saber with its missile or nuclear programs, calls spike in South Korea for longer-range missiles to counter threats from the provocative regime. Since 2010, South Korea and the U.S. have been in talks to revise the missile range pact, though few details have been released.

“Various realities and circumstances have changed,” Lee said of the need for revising the agreement.

Lee said the U.S. views Seoul’s demand as “fairly reasonable” and he believes the sides will be able to reach agreement in the near future, but gave no specific time frame.

“If North Korea attacks with missiles, they can reach even the [southern] island of Jeju. Therefore, we need to be symmetrical,” Lee said. “There is an understanding between the South and the U.S. that it is right to extend our missile range to an appropriate level.”

A presidential official said Seoul and Washington have been in talks on the missile range, but no specifics have been finalized.

Also Thursday, a South Korean government official said on condition of anonymity that the two allies could begin specific consultations on the missile range next month.