Chief judge of High Court to sit as a senior

Chief judge of High Court to sit as a senior 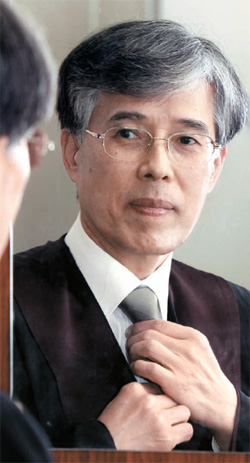 
In an unprecedented move, the Supreme Court has transferred the chief judge of a High Court to the position of senior judge in the Seoul High Court.

Judge Cho Yong-ho, 57, was transferred from his position as head of the Gwangju High Court to wear robes again as a senior judge at the Seoul High Court on Feb. 16.

When asked by the JoongAng Ilbo reporter who met with Cho in his new office on March 8 to discuss whether his decision was a difficult one, the judge replied, “I recalled Robert Frost’s poem ‘The Road Not Taken.’ I was worried that a chief justice returning to the Justice Department might be a hindrance to the organization and my juniors.

Outside of the courts, it’s like a hospital director returning to treatment or a president of a university returning to lecturing. But I chose to be a senior judge because a judge needs to take part in trials.”

But Cho expressed that having a judge with many years of experience under his belt present in the court is a benefit to the judicial system.

“It is only natural for a judge to take part in trials,” he said.

“As a judge, if there is no reason for disqualification, a matured judge with years of experience and knowledge is a means for the judiciary branch to gain the trust and confidence of the people.

“Rather than judges who retire early and become lawyers, I like to think that working in the courts is a lifetime job.

“It’s just the beginning that’s difficult. Perhaps other judges were secretly waiting for someone to pave the way.”

Judge Cho has mostly dealt with administration and patent cases throughout his career and now has been assigned to fair trade cases.

Though he is returning to the scene for the first time in three years, Cho said his experience as a chief judge at the Gwangju High Court will serve him well as a senior judge at the Seoul High Court.

“Depending on your job, your vision and viewpoints change. Even if you are a judge, a young associate judge, a district senior judge, a High Court senior judge or a chief judge, your viewpoints will change.

“Coming from an administrative job such as a chief judge to become a High Court senior judge again, I can understand the flow of the court system much better. I recall all the lectures I gave judges when I was chief justice. Now, I need to preside over trials keeping in mind the words I said.”

Regarding whether he had any advice to give his junior colleagues, Cho said, “I often said judges need to be in a position where they only speak through their rulings.

“When a ruling is announced, there is criticism from those concerned and the general public, screening from the Supreme Court, followed by scholars’ reviews.”

“When dealing with public matters, I keep in mind the words of Jeong Yak-yong [Korean philosopher of the Joseon Dynasty] that you have to give your fullest sincerity, and even if you are alone in your sincerity, you have to behave upright and be prudent in your words.”