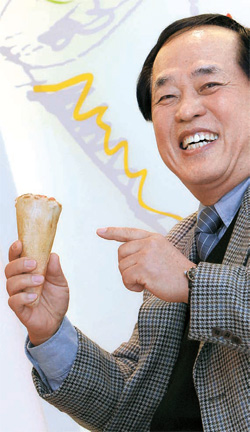 Maeng Woo-yeol, at 66, has 30 years of flying under his belt as a Korean Air pilot. Having flown all over the world and even having piloted a Boeing 747 jumbo jet, Maeng now finds himself in control of a completely different mission: running a pizza franchise.

In December of last year, Maeng opened Kono Pizza, an Italian pizza franchise that makes takeout pizzas in the shape of a cone.

“When I was a pilot, I saw in Italy people eating pizza without a fork or knife while walking around - and I thought, that’s it,” said Maeng in an interview at the red-and-white main branch of Kono Pizza in Sinsa-dong, southern Seoul, last week.

Although he had seen the business item a year before his retirement in 2005, he hadn’t initially latched on to the idea as a possible post-retirement occupation.

“After retirement, I was spending my time exercising, drinking with friends and enjoying myself,” he said. “But after a year or so, I began to feel disillusioned by the meaningless daily routine.”

As he sought a new passion, the memory of the cone-shaped pizza remained with him. After flying to Italy, Maeng began a series of trips between Korea and Italy in order to set up a franchise licensing deal.

Although Maeng has been familiar with the tension of having the lives of hundreds of passengers under his responsibility, the strain of opening a business for the first time brought its own bouts of turbulence.

“I feel a different sort of pressure than I did during my time as a pilot,” he said, adding that the pressure comes from the knowledge that when franchises go belly-up, it drags franchisees under as well.

Drawing from his time in the cockpit, Maeng puts trust between the franchise and the headquarters as his first priority.

“The relationship between franchise headquarters and the franchisee are like that of the pilot and the first officer,” he said. “Without trusting in each other, nothing can be done.”

Kono Pizza, created in 2004 by Italy’s Boscolo Group, a hotel chain and food conglomerate, has had a fair amount of success in traveling to other markets, with 100 restaurants now in more than 40 countries, including Germany, France and Taiwan.

Maeng said he plans to protect local franchisees by keeping the number of Kono Pizza restaurants under 100 nationwide and not allowing a restaurant to open within 500 meters (1,640 feet) of an existing one.

“Although there are still only three restaurants in Korea, I plan to take the time to grow together [with franchisees] rather expanding too fast,” he said.