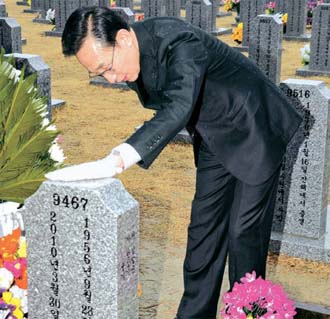 At the National Cemetery in Daejeon yesterday, President Lee Myung-bak pays tribute to 46 fallen sailors killed in the sinking of the South Korean warship Cheonan on March 26, 2010, to mark the second anniversary of the incident. [YONHAP]

President Lee Myung-bak paid his respects yesterday to the fallen sailors killed in North Korea’s 2010 sinking of a South Korean warship, ahead of the second anniversary of the deadly attack that still weighs heavily on inter-Korean ties.

The warship Cheonan mysteriously sank in waters near the tense western sea border with North Korea on the evening of March 26, 2010, killing 46 sailors aboard. A South Korean-led international investigation later concluded that a North Korean submarine torpedoed the vessel.

The attack, along with the North’s shelling of the western border island of Yeonpyeong in November that year, plunged the already-frayed relations between the two sides to their lowest levels in decades. Pyongyang has refused to apologize for the Cheonan’s sinking, denying any involvement.

Amid drizzling rain Friday, Lee visited the national cemetery in the central city of Daejeon and paid his respects to the fallen sailors buried there, wiping rain water off the framed photos of some fallen soldiers placed in front of their gravestones.

“I heard he had a dream of becoming a train driver, but ended up like this while serving in the military at such a young age,” a solemn-faced Lee said in front of the gravestone of Chang Cheol-hee, a 19-year-old sailor who was killed in the attack.

Lee said he paid a visit to the cemetery days earlier than the March 26 anniversary because he has to host world leaders attending the Nuclear Security Summit scheduled for March 26-27. U.S. President Barack Obama and dozens of other global leaders are scheduled to attend the conference.

Lee said the participating countries in the summit represent 95 percent of the world’s entire gross domestic product, and the conference is expected to produce a commitment to do away with enough fissile material to build about 20,000 nuclear weapons.

“Fifty-eight world leaders are coming. They are gathering to make a world without nuclear weapons,” Lee told reporters during a train ride on the way back to Seoul. Yonhap