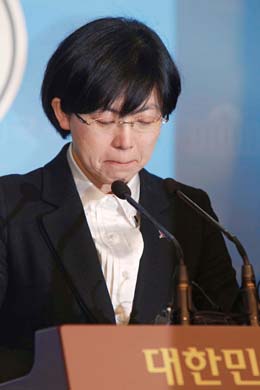 Lee Jung-hee, co-chairwoman of the Unified Progressive Party, announces yesterday at a press conference at the National Assembly that she will give up her bid for the April 11 legislative elections. By Kim Hyung-soo

The liberals attempted to salvage their sinking alliance yesterday as Representative Lee Jung-hee, a co-chairwoman of the Unified Progressive Party, gave up her nomination in a Seoul constituency over a rigged primary outcome against her Democratic United Party rival.

“I feel ashamed and sorry,” Lee said in a press conference yesterday afternoon. “I am responsible for dragging the ethics of the progressives through the mud. I must assume responsibility.”

Admitting that she had caused the biggest problem in the liberal primaries, Lee apologized for damaging the alliance and promised to sacrifice herself for the good of the liberals.

“Please vote for our consolidated liberal candidates around the nation,” Lee said. “Without victories, we cannot have expectations for democracy, economic justice and peace.”

The hard-won liberal alliance between the two political parties was on the brink of a breakup over the growing fallout from the rigged primaries to consolidate their candidates in the April 11 legislative elections.

Despite revelations that her staffers had rigged a telephone survey during the primary in southern Seoul’s Gwanak B District, Lee refused to give up her nomination until yesterday morning. She did, however, make a last-minute announcement to bow out of the race on the final day of candidate registration. “She made a sacrifice and concession to achieve the ultimate goal of the liberal alliance, which is winning the legislative elections and judging the Lee Myung-bak administration,” Park Yong-jin, spokesman of the DUP, said yesterday. “The DUP shares the responsibility and will work to solidify the alliance.”

A meeting between Lee and DUP Chairwoman Han Myeong-sook was also scheduled for Sunday to further strengthen the alliance.

To reciprocate Lee’s move, the DUP also announced a concession in a Gyeonggi constituency. DUP Chairwoman Han and Baek Hye-ryun, the party’s candidate for Ansan-Danwon A District, held a press conference minutes after Lee’s media announcement and said Baek has decided to give up her nomination.

To pressure the UPP, the DUP went ahead and nominated Baek on Thursday, challenging the legitimacy of the primary. Baek was defeated by her UPP rival Cho Seung-chan, but the DUP questioned the legitimacy of the primary, citing a poor sampling of the survey. “I will bury all the suspicions in my heart for the sake of the liberal alliance,” Baek said. Han also addressed the press. “I express my respect for Lee for making the decision after unimaginable pain,” Han said. “I also appreciate Baek for making a decision to sacrifice herself.”

Han also said the DUP and the UPP have resolved all controversy surrounding the primaries, declaring that the alliance will remain strong.

Speculations were still high until Lee’s press conference at 3 p.m. that she would hold onto her nomination and the liberal alliance would break up. Earlier in the morning, Lee’s defeated DUP rival Representative Kim Hee-chull departed from the largest opposition party and registered his candidacy with the National Election Commission to run independently in the constituency.

The DUP said yesterday it will not field a candidate in the constituency, while stressing that Kim is not its contender. The party said it will be up to the UPP if it wants to field a candidate there to face Kim and the Saenuri Party’s Oh Shin-hwan.

The UPP said it will nominate Lee Sang-gyu, a former Seoul chapter head of the Democratic Labor Party, in Gwanak B District. The former senior official of the Korean Confederation of Trade Unions was the DLP’s Seoul mayoral election candidate in June 2010, but dropped out of the race to support Han, who was the Democratic Party’s candidate at the time.

While the Han leadership was fiercely criticized for its inability to save the alliance, Moon Jae-in, former chief of staff of the Roh Moo-hyun Blue House and a liberal presidential front-runner who is currently running as the DUP candidate in Busan’s Sasang District, was credited with mediating the two liberal parties’ war.

Suspending his campaign in Busan, Moon came to Seoul on Thursday and met with Lee late that night to persuade her to step down. According to their aides, Lee and Moon sat down for a one-on-one meeting from 11 p.m. until 1 a.m. yesterday to discuss the liberal alliance.