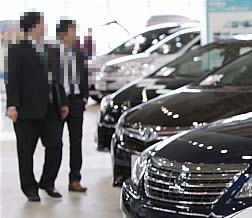 Lee Young-ho, a 26-year-old car salesman, is a “super-tuberculosis patient,” whose infection cannot be cured using virtually any antibiotics.

He was first diagnosed with tuberculosis three years ago, and the hospital blamed it on his irregular eating habits, drinking and smoking. He was told that he would be able to cure his tuberculosis if he took antibiotics for six continuous months.

Lee, however, only took the pills for three months because they killed his appetite and bothered his stomach. Without taking the pills, Lee continued on with his work, meeting potential customers to sell cars.

Not long after, he was sick again and eventually ended up being hospitalized two months ago at the Seoul Metropolitan Government’s Seobuk Hospital in Eunpyeong District, northern Seoul.

This time, he was diagnosed with so-called drug-resistant super tuberculosis.

“If you skip pills, it becomes more difficult to cure tuberculosis because the body becomes tolerant to the medicine,” said Cho Young-soo, an official from Seobuk Hospital.

Among the Organization of Economic Cooperation and Development countries, Korea has the highest rate of tuberculosis and highest rate of death from the disease. Around one-third of the country’s population could potentially be infected by the disease because the bacteria spread widely during the Korean War.

According to a report released by the Korea Centers for Disease Control and Prevention ahead of World Tuberculosis Day today, last year, 39,557 more people were reported to have been infected by the bacteria. The number of deaths caused by the disease was 2,365 in 2010, the latest compiled data.

A 40-year-old female who works at a restaurant recently visited a public health center in South Jeolla this week to receive a comprehensive checkup. She was suspected of tuberculosis based on her X-rays, but she refused to receive an additional checkup and didn’t go back to the doctor.

“It’s unfortunate because we can’t force them to undergo additional examination or to take medicine,” said an official from the center.

Kim Dae-yeon, a cardiothoracic surgeon at Mokpo National Hospital, said, “Of the tuberculosis patients, many are bus drivers, teachers and restaurant workers that are exposed to public infection, but many of them refuse to cure the disease because they are concerned they will lose their job if they are hospitalized.”

As of 2008, among the 50,000 tuberculosis patients, more than 3,000 patients were diagnosed with multiple-drug-resistant tuberculosis or super tuberculosis.

As part of efforts to prevent the tuberculosis patients from turning into super-tuberculosis patients, the Ministry of Health and Welfare has been beefing up its efforts since early this year and making sure patients take their medicine by promoting the directly observed therapy project the World Health Organization encourages.