The bones of a child were also found in the well, and archaeologists speculate that the bones were part of a human sacrifice. Provided by the Cultural Heritage Administration

Storytelling is one of the things that differentiates humans from animals, scientists say.

In that sense, a special exhibition currently underway at the National Museum of Korea takes full advantage of our storytelling capabilities in an attempt to trigger people’s interest in findings from 1,300 years ago.

The exhibition has two stories to tell: One about two wells in Gyeongju, North Gyeongsang, and the other about an iron pot in Changnyeong, South Gyeongsang.

The two wells - thought to originate from somewhere between the eighth and ninth centuries of the Silla Dynasty (BC 57-935) - were discovered between 1998 and 2000 at the site of the Gyeongju National Museum as museum officials were working to expand the museum facilities.

From well No. 1, which is 10 meters (32.8 feet) deep, archaeologists unearthed about 2,200 artifacts including pottery, roof tiles, a wooden brush, animal bones and the bones of a child between the ages of 7 and 10.

And from well No. 2, which is at least 3 meters deep, archaeologists uncovered about 600 artifacts including animal bones, pottery, roof tiles and metal and wooden crafts.

All of these items are on display at the exhibition, “Opening of Time Capsules: Wondrous Expedition to the Past,” which kicked off its run last week and continues until May 6. 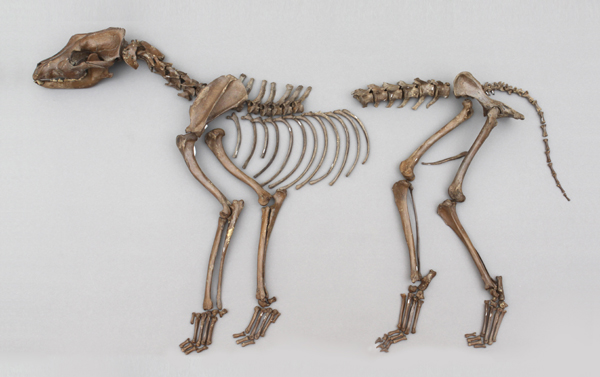 The bones of a dog were found in one of the wells, which also contained the bones of mammals, birds and fish, leading to speculation about the history of the area.


So what happened in those wells hundreds of years ago? Did the child and the animals fall into them by accident? Or were they sacrificed as part of a ritual?

“Pottery is often found in wells, as people put them there when they built the wells to wish for clean water in ancient times,” said Kim Hyeon-hee, a researcher in the National Museum of Korea’s ancient history division. 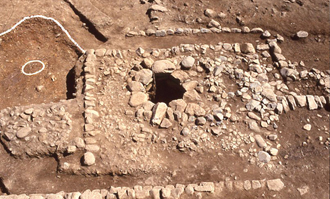 One of two wells whose contents are on display at the National Museum of Korea. The wells were used between the eighth and ninth centuries of the Silla Dynasty in Gyeongju, North Gyeongsang, and were discovered between 1998 and 2000 at the site of the Gyeongju National Museum.

“Sometimes animal bones and peach pits are also found,” she said, although she added it’s unclear as to why a child’s bones were found in the well. Thus, the answer to that question is left to the imagination of visitors for now. Archaeologists do suspect that the child was probably a human sacrifice, given at least three facts: he or she was found in the top layer of soil; historical documents say the people of Silla performed rituals at wells; and there were chronic droughts during eighth- and ninth-century Silla.

As for the iron pot, it was discovered in 2003 at a site presumed to have housed a Buddhist temple. The pot is thought to be from between the ninth and 10th centuries of the Unified Silla period (668-935), during which Silla conquered neighboring kingdoms and controlled much of the Korean Peninsula.

The pot contained some of the most well-crafted and delicate decorative gold pieces from the time, which are presumed to have been part of Buddhist altars or used at Buddhist rituals.

But the most interesting thing is that these pieces were in the bottom of the pot and were covered with worthless metal pieces on the top.

Were they trying to hide the pot from someone else? Were people running away from something? Perhaps a war or a fire?

“The Unified Silla period was a very unstable and fast-changing time,” Kim said. “Although it’s unclear why [the artifacts were placed in the bottom of the pot], clearly it was an urgent situation.”

One of the artifacts from the iron pot that attracted attention from the Korean archaeological community is an incense burner that has a handle decorated with gold ornaments, which museum officials say represents the first physical discovery of such an object.

An incense burner that has a handle decorated with gold ornaments

“An incense burner with a handle has appeared as a Buddhist offering tool in sculptures and stone arts, but has never been seen as a real object,” said Song Ui-jeong, the head of the museum’s archaeology and history division. “As it’s the first such artifact found through excavation, it’s pretty significant.”

He added that the finding challenges the existing theory that Japanese incense burners with handles were imported from China and that the incense burner with a handle, currently on display at the Leeum Samsung Museum of Art, was from China.

“Opening of Time Capsules: Wondrous Expedition to the Past” runs until May 6 at the National Museum of Korea in Yongsan District, central Seoul. Admission is free. Hours are 9 a.m. to 6 p.m. on Tuesdays, Thursdays and Fridays, from 9 a.m. to 9 p.m. on Wednesdays and Saturdays and from 9 a.m. to 7 p.m. on Sundays and holidays. The museum is closed on Mondays. To get to the museum, go to Ichon Station, line No. 4, exit 2. For more information, visit www.museum.go.kr or call (02) 2077-9000.