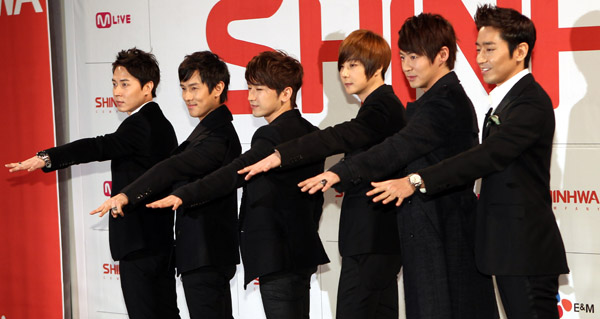 
Boy band Shinhwa’s title track “Venus” from its new album “The Return” has reached the No. 1 spot on various online charts, helping the group make a triumphant return after a four-year hiatus.

The song was composed by Andrew Jackson, who has composed for Britney Spears and other artists. The lyrics were written by band member Lee Min-woo.

“‘Venus’ won’t be the only high-performing song from the album,” said a representative from the Shinhwa Company. “A lot has gone into the completion of the record, and you could say that the members brought their 14 years of experience to its creation.”

The band gave its first performance in four years on Saturday and Sunday at Olympic Hall in Seoul. The concert sold out in just 40 minutes on Feb. 13, selling a total of 20,000 tickets and setting a new concert sales record on the Interpark ticket Web site.