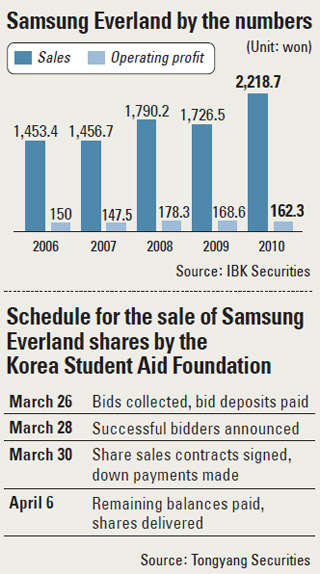 Investors are lining up to purchase unlisted shares of Samsung Everland to be sold by the Korea Student Aid Foundation despite the fact that Everland has no intention of going public.

Everland even warned investors of “potential losses from buying its shares,” but retail investors are flocking to buy pieces of the company. Everland stocks are now traded at 2 million won ($1,762) per share. Official bidding will take place today.

The Korea Student Aid Foundation is selling 106,149 shares, or 4.25 percent of the company, to the public, and wealthy investors are taking a huge interest.

Tongyang Securities, the underwriter of the shares, said it would be able to sell all the shares as deep-pocketed investors are participating through investment trust funds or private equity funds.

The shares of the de facto holding company of Samsung Group, the country’s largest conglomerate, once belonged to the late Lee Yoon-hyung, the youngest daughter of Samsung Electronics Chairman Lee Kun-hee. The shares were donated by the group to the Korea Student Aid Foundation in 2006.

“Private bankers say there are many wealthy investors trying to buy the shares,” said Yang Gwi-hwan, an executive in charge of mergers and acquisitions at Tongyang.

Tongyang intends to select the highest bids for the shares. The bids are expected to hit 2 million won per share. This is higher than the price paid by KCC, which bought a 17 percent stake in the company last year. KCC is the second-biggest shareholder of Samsung Everland after Jay Y. Lee, the only son of Lee Kun-hee and chief operating officer of Samsung Electronics.

It’s rare for investors to get a chance to buy into Everland because its shares are unlisted and mostly held by the Lee clan and Samsung affiliates. But the dividends are small and the value of the shares is hard to determine at any given time.

The financial industry attributes the popularity of the shares to their potential value. Everland had over 2 trillion won in sales in 2010. Its sales grew by an average of 15 percent from 2007 through 2010. The company also owns lucrative assets. Everland owns a 19.34 percent stake in Samsung Life Insurance, the country’s leading insurer and major shareholder of Samsung Electronics, as well as vast real estate in Yongin, Gyeonggi.

Everland holds a key position in the complicated cross investments that control the group. Samsung Electronics holds a large stake in Samsung Card, which owns a considerable stake in Everland. Shareholders of Samsung Everland can exercise their voting rights through investment trust funds.

However, there are also risks. There will be a lot of Everland shares put up in the market next month. Samsung Card needs to dispose of 3.64 percent of its 8.64 percent stake in Everland by April 26 because of the laws that forbid financial institutions from owning 5 percent or more of industrial companies.