Mike Tyson set to tell his story in Las Vegas

Mike Tyson set to tell his story in Las Vegas 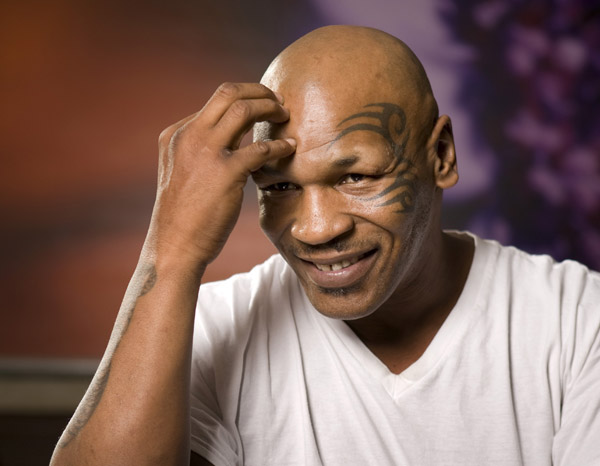 Former heavyweight boxing champion Mike Tyson of the United States thinks over a question during an interview at the MGM Grand Hotel and Casino in Las Vegas on Friday. [REUTERS/YONHAP]


LAS VEGAS - Former heavyweight boxing champion Mike Tyson has, in his own words, behaved like a “Neanderthal” for much of his life.

But next month, he hopes to become a “controlled artist, a disciplined artist” when he takes to a Las Vegas stage to talk about his checkered life as a childhood thief, an ear-biting fighter, an addict and a father of eight.

Tyson, who in 1986 became the youngest world heavyweight champion at age 20, is set to perform an autobiographical monologue called “Mike Tyson: Undisputed Truth - Live on Stage.”

“I hope people are entertained, and happy. I hope they get to know certain things. My story’s not pretty. There’s lots of ugly stuff - not knowing if my mother ever loved me, or who my father was,” Tyson, now 45, told Reuters in an interview.

Tyson was the undisputed world heavyweight boxing champion in the 1980s, but in 1992 he was convicted of raping teenage beauty queen Desiree Washington in Indiana, and subsequently served three years in prison.

He added to his notoriety later in the decade when he bit rival Evander Holyfield on both ears in a 1997 bout, for which he was disqualified and temporarily suspended from boxing. Tyson declared bankruptcy in 2003 and retired from professional boxing in 2006.

Since his retirement from boxing, Tyson has appeared in the TV shows “Entourage” and “Brothers” and had a cameo role in the 2009 hit comedy movie “The Hangover.”

Tyson credits his former trainer and mentor Cus D’Amato for his successes. Before D’Amato took him in, Tyson said, “I never met a white guy that knew how to talk to me. Before that, it was always submissive, ‘Yes sir, no sir.’”

“He always told me, be careful how you fight, because the way you fight your fights is the way you live your life. And the way I fought was reckless and destructive and that that’s how I lived my life for a while.

Adam Steck, the show’s producer, said audiences will be surprised by the performances, which are scheduled for April 13-18 at the MGM Grand Hotel and Casino on the Las Vegas strip.

“People think they know Mike Tyson but this is a totally different angle,” Steck said. “The way he approaches life, he’s a very spiritual guy and has learned so many lessons from life.”

The former champion said he has learned to control his once-feared anger, a calm his wife, Kiki Tyson, attributes to a vegan diet.

As for today’s fighters, Tyson demurs when asked if he thinks he could go toe-to-toe in the ring with heavyweights like the Klitschko brothers, who have been champions for much of the last decade.

Turning his thoughts back to Mike Tyson the man, he said, “You can only be an athlete for a certain part of your life. But you’re gonna be a human for the rest of your life. So you work hard to become a better human.”