KT shows its technology at summit

KT shows its technology at summit 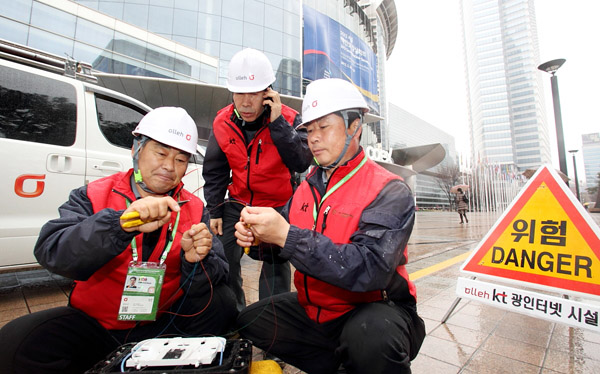 Workers from KT fix optical fiber cables during an emergency drill on Friday near COEX, southern Seoul. The drill was part of preparations for the 2012 Seoul Nuclear Security Summit today and tomorrow at COEX. Provided by the company


KT, a major mobile service provider, has opened a booth at the venue for the 2012 Seoul Nuclear Security Summit to promote Korea’s cutting-edge information and communication technologies.

From today until Wednesday, KT will operate the booth inside the media center on the first floor of COEX in southern Seoul. The booth showcases KT’s LTE WARP, which combines existing fourth-generation long-term evolution networks with virtualization technology.

LTE WARP, which was launched across Seoul in January, operates KT’s ubiquitous landline infrastructure as a single server. The technology fixes the chronic problem of deterioration of telephone networks at the respective borders between base stations, KT says, and its speed is twice as fast as existing LTE networks.

By April, 84 more cities as well as highways and bullet trains will be equipped with the technology, which KT hopes to export in the future.

At the WARP experience spot inside the booth, which is modeled after a Star Wars spaceship, visitors can try LTE-enabled handsets, applications and games with motion recognition functions. KT has a license with Lucasfilm, producer of the Star Wars movies.

The booth will be open only to summit visitors for the first two days, and the general public will get its chance on the final day.

Meanwhile, KT has installed 5,000 mobile and landline circuits across COEX as well as in major hotels in Seoul. To stabilize the network and enhance security, the formerly government-run company has dualized equipment and network systems. Some 20 IT experts will be dispatched to the summit around the clock.