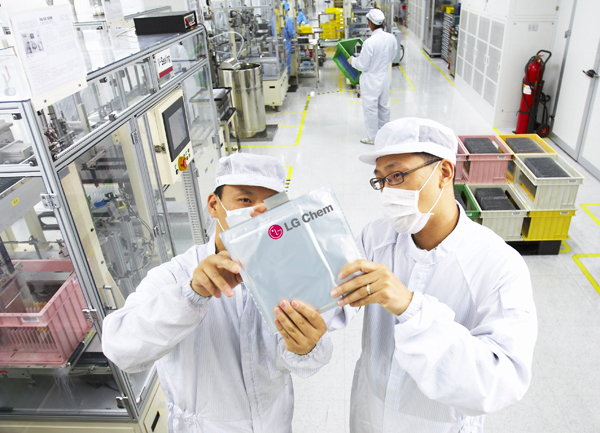 
For the first time, Korea has outstripped Japan in the global lithium-ion battery market just as it did in the semiconductor market roughly 10 years before.

According to recent statistics by IIT, a Japanese technology market researcher, Samsung SDI, the battery and liquid crystal display making unit of Samsung Group, accounted for 23.6 percent of the global lithium-ion battery market in 2011, beating out Japan’s largest battery maker Panasonic, which had 18.1 percent.

The combined market shares of Samsung and LG exceeded those of Japanese rivals for the first time, reported Japan’s Nihon Keizai Shimbun (Nikkei) earlier this month.

The market researcher forecast Samsung will keep its leading position and gain an additional 1.1 percent point at the end of the year.

Samsung is planning to accelerate efforts to strengthen the battery business this year. It is in talks with BMW to supply rechargeable batteries for the German brand’s electric vehicles (EV).

“The lithium-ion battery business has great growth potential, which will serve as a cash cow for Samsung after semiconductors and liquid crystal displays,” an industrial insider said.

“It seems possible that we, being in the forefront of the EV battery market, can grab the world’s second-highest spot in a short period of time,” an LG Chem official said.

Lithium-ion batteries are widely used in IT gadgets like laptops and mobile phones and also for EVs. Also called rechargeable or green batteries, they were first developed by Sony in 1991. Japanese companies took up more than half of the global market until 2008. Korean companies barely claimed 20 percent at the time.

LG Chem has achieved growth more rapidly than others.

The company developed the world’s first pillar-shaped lithium-ion batteries for 2,200 milliamp-hour (mAh)-class laptops in 2001 and batteries for 2,600 mAh-class in 2005, far ahead of Japanese firms, it said.

Korean companies were beneficiaries of the earthquake and tsunami that swept the northeastern part of Japan in March 2011 and halted production for Japanese battery makers. Sony’s battery production base in Fukushima Prefecture suffered damage from the tsunami, which pushed its market shares to a single-digit figure.

Samsung and LG have also been speedier than Japanese contenders in reducing production costs. They purchase most of their raw materials from China, which gives them price competitiveness, the companies said.

In response, Panasonic said it will shift more of its output of lithium-ion batteries to China from Japan in order to slash production costs and restore its market share, the Nikkei said.

Panasonic will invest up to 30 billion yen ($366 million) to build a new plant in China by late this year. It aims to cut manufacturing costs by 30 percent while boosting production volume for the batteries in China to 50 percent by 2015.

The battle between Korean and Japanese battery makers is similar to what happened in the global semiconductor market.

The global Dynamic Random Access Memory market was dominated by Toshiba, NEC, Fujistu and Hitachi until the 1980s. A decade earlier, it was led by U.S. companies like Intel, Texas Instruments and Motorola. In 1987, Japanese companies claimed over 70 percent of the market.

The ball was grabbed by Korean chipmakers over the next 10 years. Samsung Electronics snatched the world’s top spot with its chips for small computers, and Hynix became the second largest semiconductor manufacturer after the merger between then-LG Semicon and Hyundai Electronics in 1999.

Samsung currently controls 45 percent of the global DRAM chip market, consolidating its position as the world’s No.1 chipmaker.

The reason why Elpida had to yield to Samsung was that the Korean chipmaker focused on producing smaller chips for personal computers (though belatedly), while the Japanese had long been making large chips for large computers. Samsung’s DRAM market share jumped from 12.7 percent in 1991 to 45.1 percent as of last year. In the meantime, Elpida’s global market share dropped from 20.1 percent to 12.2 percent.