When Chey Jong-hyon, founder of SK Group, said in 1982 that his group would will jump into the oil exploration and refining businesses by finding its own oil development fields overseas, critics were skeptical.

Chey had witnessed how economies like Korea, which lack indigenous natural resources, were thrown into turmoil by the second oil-price shock of 1979. 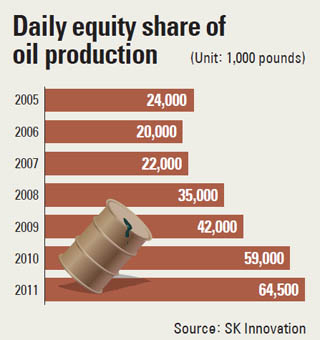 “If we don’t secure resources on our own, this could undoubtedly bring negative consequences to the entire country,” Chey told his executives. “We need to invest 15 percent of the company’s revenue for oil development every year. Don’t reprimand employees even if they fail. The oil development business cannot reap returns in one or two years. We can reap the harvest only after making persistent efforts over 10 to 20 years.”

And sure enough, success was scant at the start of the initiative.

The company failed to find any oil in its initial exploration projects in Indonesia and Africa in 1983 and 1984. Although some executives were dubious about the new business, Chey didn’t give up.

Oil production began in December 1987 and the first shipment of 350,000 barrels of oil extracted by Koreans arrived in Ulsan in January 1988.

Chey Tae-won, the eldest son of the founder and current chairman of SK Group, inherited his father’s innovative spirit and has been expanding the company’s energy development business since 2004.

SK Innovation last year had 1.5 trillion won ($1.3 billion) in sales and 514.5 billion won in operating profits, the first private company in Korea to record such an achievement in the oil development business.

SK Innovation set a goal to increase its equity in oil production to the equivalent of 1 billion barrels by 2020.

In 2011, Korea’s largest oil refiner reached an important milestone by selling its stake of three oil blocks off Brazil to Maersk Oil, a Danish company, at $2.4 billion.

With the growing importance of energy security and rising uncertainties in the oil market, the government and other Korean companies are interested in oil exploration, said an official at SK Innovation, but they hesitate to actually dive in because the oil development business requires long-term investment and high-end exploration technology.

“Because it’s hard to accurately assess the value of oil blocks, selling and buying such blocks is even more challenging,” said an official at SK Innovation. “The sale of the Brazilian oil blocks is significant because the value of an oil field once owned by a Korean company was recognized by a European oil operator.”

In 2010, SK Innovation completed construction of a liquefied natural gas plant in Peru. The plant liquefies natural gas extracted from block 56 and block 88. The company built a 408 kilometer pipe line linking the blocks to the LNG plant.

“Given that the company’s previous energy exploration projects were focused on securing exploration blocks and energy development, the Peru plant established a complete value chain in the natural gas business that encompasses manufacturing, transport and export of the resource to the overseas market,” said another official at SK Innovation. “We will continue contributing to Korea’s energy independence by aggressively expanding into energy exploration businesses all over the world.”