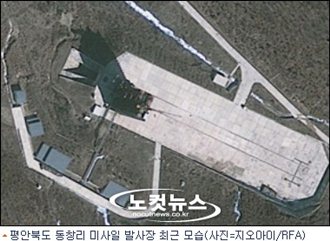 As the North shows no sign of budging from what is widely condemned as a long-range missile test, Seoul and Washington confirmed yesterday that the North has moved the main part of a missile to a new northwestern rocket launch site.

“The South Korea and U.S. militaries are aware that North Korea has moved the body of a long-range missile to a missile launch site in Tongchang-ri, North Pyongan Province, and is preparing for the launch inside the building on the site,” an official of the Joint Chiefs of Staff said, confirming a Japanese media report earlier in the day.

Fuji Television reported, citing informed sources, that a train took the main body to the launch site in Tongchang-ri in Cholsan County on Saturday.

North Korea announced on March 16 that it will launch a long-range missile Unha-3 rocket between April 12-16 to celebrate the centennial of the late North Korean founder Kim Il Sung’s birth, which falls on April 15. It said it would put satellite Kwangmyongsong-3 atop the Unha-3 and launch it into orbit for scientific purposes.

It said the missile will be launched from its northwestern region, not the northeastern site it used for the previous missile launches.

The U.S. is warning the missile launch will break a Washington-Pyongyang deal concluded last month, in which the North promised to take several pre-emptive denuclearization measures including suspension of tests of long-range missiles in return for 240,000 metric tons of food aid.

The North has launched long-range missiles under the pretext of satellite tests in what are seen as bids to test the technology of missiles to carry nuclear warheads.

The UNSC Resolution 1874 bans the North from conducting any tests involving long-range ballistic missiles. The North is claiming that it does not contradict the Pyongyang-Washington deal.

“The Democratic People’s Republic of Korea remains unchanged in its stand to sincerely implement the DPRK-U.S. agreement,” KCNA said on Friday, referring to the North’s official name.