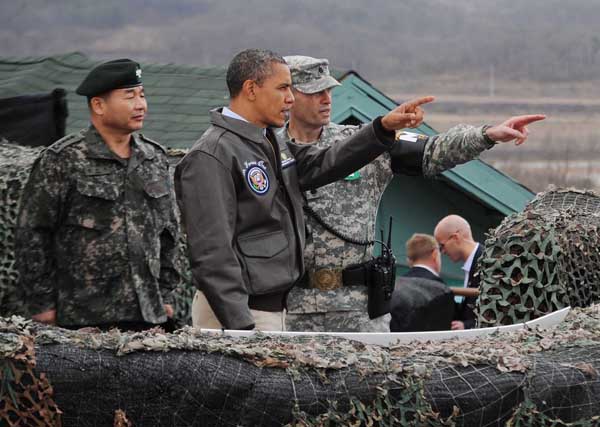 U.S. President Barack Obama, center, visits the Observation Post Ouellette along the Demilitarized Zone between North and South Korea yesterday. Behind him is Jung Seung-jo, chairman of South Korea’s Joint Chiefs of Staff. Obama visited South Korea’s tense border with the North in a show of solidarity with U.S. ally South Korea and as a message of resolve against Pyongyang’s nuclear standoff with the West. [Joint Press Corps]


President Lee Myung-bak and U.S. President Barack Obama yesterday urged North Korea to call off its plan to launch a missile next month, warning it is a violation of an international norm and will only deepen the country’s isolation.

“Bad behaviors will not be rewarded,” Obama told a joint press conference after a meeting with Lee at the Blue House late yesterday. At the conference, Lee said the two countries will sternly deal with a North Korean provocation.

The meeting between the presidents came a day before the start of the Seoul Nuclear Security Summit, designed to deal with nuclear threats from non-state terrorists.

The North’s planned launch, scheduled between April 12 and April 16, is ostensibly to launch a satellite, but is widely seen as test of a long-range missile to carry weapons and even nuclear warheads.

Stressing the “extraordinary” poverty of the North, Obama said the consequences of the North’s pushing ahead with the test will be lost opportunities. He said its hunger-stricken people will take biggest hit from it.

The missile launch is seen as a “deal-breaker” for an agreement between Washington and Pyongyang last month, in which the U.S. promised to give 240,000 metric tons of nutritional assistance in return for several pledges by the North, including suspension of long-range missile tests.

Describing a seeming contradiction in the North’s behavior, Obama said the new leadership in the North, led by Kim Jong-un, appears to be unsettled, and that he wasn’t sure “who is calling the shots.”

Obama is scheduled to give a speech today to students of Hankuk University of Foreign Studies on the school’s campus in northern Seoul before attending the summit at Coex, in southern Seoul.

In a meeting between Lee and Thai Prime Minister Yingluck Shinawatra on Saturday, the two leaders said the North’s launch would be a betrayal of the hunger-stricken populace of the North. Lee will meet 20 more leaders through Thursday.

The North claims that the launch is for the purpose of the peaceful use of space, which it says is guaranteed under the Outer Space Treaty written in the 1960s. 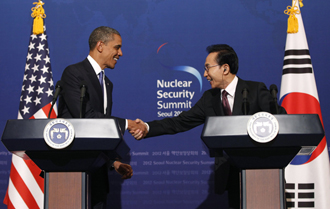 On Saturday, it sharpened its rhetoric toward the South and said any statement on the launch plan during the Seoul summit could lead to countermeasures and an “extreme situation” on the Korean Peninsula. Two deadly attacks by North Korea on the South in 2010 killed 50 South Koreans, including two civilians, although Pyongyang denies sinking the Cheonan warship two years ago today.

The two Koreas remain technically at war since the 1950-53 Korean War ended in an armistice, and there are around 28,000 U.S. soldiers stationed in the South.

Early yesterday, Obama visited the Demilitarized Zone, calling it “freedom’s frontier.” He stopped at Camp Bonifas near the 2.5-mile-wide zone, saying he is proud of the U.S. soldiers at the camp, named after a U.S. soldier hacked to death in 1976 by North Korean soldiers at the truce village of Panmunjom.

“There’s something about this spot in particular,” he said.

Obama, the architect of the nuclear security summit and the host of the first summit held in Washington in 2010, is known to have recommended Seoul to host the second.

The two-day summit, which has attracted leaders of 53 countries and four international organizations, is the largest diplomatic event Korea has ever hosted. “The contrast between South Korea and North Korea could not be clearer, could not be starker,” Obama said during his visit to the U.S. troops yesterday. 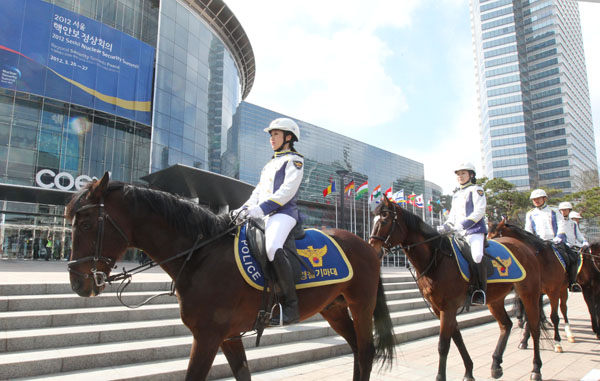 Mounted policemen yesterday patrol Coex, the venue of the Nuclear Security Summit, which will be held today and tomorrow in Seoul. [YONHAP]

The police said they will close the roads surrounding Coex from Sunday at midnight until 10 p.m. tomorrow and encouraged the public to use public transportation.

Some rallies in protest of the summit were held in the city, but ended without significant public disturbance, police said.