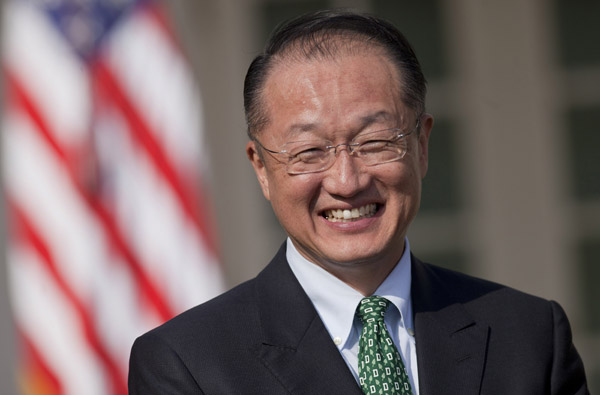 “The World Bank plays a crucial role in eradicating world poverty and fostering development, so Kim is fit for the job given his previous experience in related fields,” said Blue House spokesman Park Jeong-ha. “Korea highly appreciates President Obama’s decision to choose Kim and will closely cooperate with the World Bank in the coming days.”

As a pioneer in the treatment of HIV, AIDS and tuberculosis, Kim has the breadth of experience on development issues needed to carry out the financial institution’s antipoverty mission, Obama said.

Kim, who moved from Korea to the U.S. at the age of five, has an M.D. degree from Harvard Medical School and a Ph.D. in anthropology from Harvard University.

Before going to Dartmouth in 2009, he was director of the World Health Organization’s HIV/AIDS department and a professor at Harvard concentrating on new strategies to improve health in developing nations.

“We expect President Kim to build a bridge between developing and developed countries in a fast-changing global economy,” said Park in a release.

The World Bank will select its new leader in a joint meeting with the International Monetary Fund in April, and the chosen president will start work in July. Traditionally, the U.S. nominee gets the job. The new president will replace Robert Zoellick.

The two other candidates are Colombian national Jose Antonio, a professor at Columbia University, and Nigerian Finance Minister Ngozi Okonjo-Iweala. Obama’s unexpected pick of the Korean-American was seen as aimed at countering a claim by African and Latin American countries that the U.S. dominates the 187-nation World Bank.

Former U.S. President Bill Clinton said, “Jim Kim is an inspired and outstanding choice to lead the World Bank based on his years of commitment and leadership to development and particularly health care and AIDS treatment across the world.”

Clinton added, “He will be the most experienced development expert to ever take the helm of the World Bank and I compliment President Obama for putting that type of proven commitment to global development at the top of his criteria for choosing the World Bank’s next leader.”