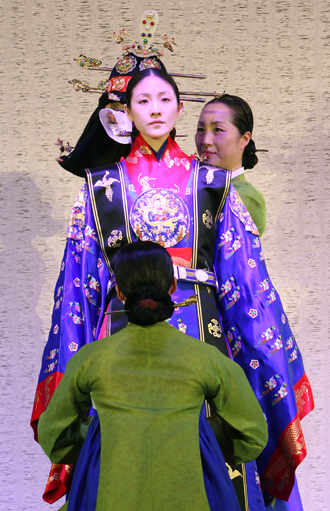 Actors rehearse for the “Queen’s Morning,” a hanbok performance, which spouses of global leaders attending the nuclear security summit will watch tomorrow. [NEWSIS]

For organizers, the Seoul Nuclear Security Summit is also an opportunity to promote Hallyu, or the Korean Wave.

The accompanying spouses of the global leaders that attend the Seoul Nuclear Security Summit today and tomorrow will be shown various cultural performances on the theme of “young Hallyu,” during their two-day stay in Seoul, the Preparatory Secretariat for the summit said.

The performances include a classical music performance at the National Museum of Korea today by young Korean musicians including 18-year-old pianist Cho Sung-jin, the 3rd-prize winner in the 2011 Tchaikovsky Competition in Russia.

On Tuesday, the spouses will watch the “Queen’s Morning,” a hanbok (traditional Korean wear) performance, where famous Korean ballerina Kim Joo-won will describe putting on a variety of royal hanbok costumes.

Then, well-known K-pop group, JYJ, and young ballad singer Sung Si-kyung will perform two songs each. The hanbok and music performances will both be held at the guest house of the Blue House.

“It is a good opportunity to present the performances by young Korean artists to the spouses of top leaders who are gathering from all over the world,” the organizers said. “We expect this will have a positive impact on helping Hallyu reach the whole world in the future.”

Of the 58 visiting top leaders for the summit, 17 are bringing their spouses, the organizers said. They represent Gabon, Nigeria, South Africa, Malaysia, Vietnam, Switzerland, Singapore, Italy, Indonesia, China, Chile, Turkey, the Philippines, the United Nations and the European Union.

The summit is the largest-ever diplomatic event South Korea is hosting and the organizers have been beefing up preparations for the summit events - including foods.

According to the organizers, the Monday dinner and Tuesday luncheon catered to the leaders will be simple considering their busy schedule. They will be a four-stage course - salad, soup, steak and dessert, containing seasonal, healthy ingredients.

The dinner tomorrow, which the leaders and their spouses are scheduled to attend together, will be Korean-style dining including dubu jjim (steamed tofu), sutbul galbi (charcoal barbecue), hongsi (ripe persimmon), bomnamul bibimbap (rice mixed with spring vegetables).

As a souvenir, the attending leaders will receive a Samsung Galaxy Tab with their names engraved on the back cover.